Sympathy For The Snake 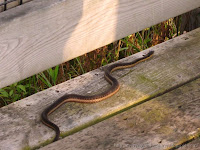 I once found something a little unexpected while I was out looking for birds at a then newly found boardwalk area and nature preserve. Sunning itself on the boards was a lone little Garter Snake. Now before you run away screaming, stay just a few seconds so I can explain a few things and take you further into this revealing story.

Many of us may very well be afraid of snakes, but this kind of snake, the garter snake doesn't even have any fangs. As a matter of fact, it is considered harmless to humans and it rarely bites. They almost always try to get away first. You might be in more danger from an angry squirrel than a little garter snake.

Sure snakes like to eat their food while it's still alive, but the things they eat are mostly smaller than them. Some of a snake's favorite foods are frogs or toads, but a big ol' bullfrog will eat a poor little garter snake just as quickly. Many snakes also like to eat little creatures that are considered pests, like insects, worms, and leeches. 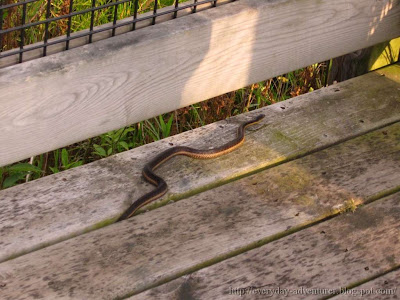 Not only do some frogs think a little garter snake is a tasty treat, so do other animals like certain fish and birds. There are a few pretty good sized birds around the boardwalk in these pictures, so this little guy is probably in a lot of danger just being there. And he was little, and scared.

As I walked closer to this little snake, the poor thing slithered away from its prime spot in the sun, in fear that I might step on it. Then it froze in fear. It gave me plenty of room to walk on by, but I stopped and took a few pictures of it. It was so afraid of the giant creature standing over it that it was too afraid to move.

It was the same reaction I got from a little toad awhile back. These little garter snakes are really more or less just lizards without the benefit of legs. No fangs, almost no venom, and no effective way to deliver it to a human if it tried. Just another small animal trying to survive.

When I made a move to step a little closer to get a better angle for my pictures, this little garter snake finally worked up the courage to flee in terror. It squirmed as quickly as it could to the edge of the platform, and it went over the side and into the grass to safety. 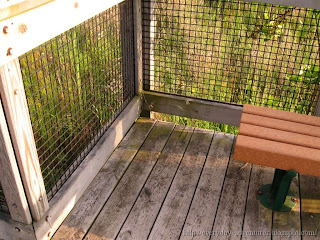 I've killed a few garter snakes in the past. I should never have forgotten the time my grandma picked one up in her garden to show me that they were not very dangerous. They even have trouble getting away. Instead, I decided to be a cruel killer. We all know they don't belong in houses, but I could have just as easily moved each one to a better place.

The little garter snake in my pictures got to live for another day this time. But what will happen to this little one tomorrow? Will it come out to the sun for more life giving heat only to be mercilessly stomped to death by another human? Will a big bird snatch it up and gobble it down? It's not easy being a snake.

We are always looking for writers who can contribute entertaining and original articles about nature. Submitting an article on Nature Center Magazine can help to promote your own website or blog.
Click Here For Details
.
Labels: Nature Tips