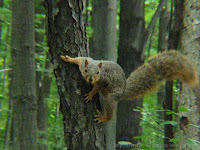 A while back on The Everyday Adventurer I wrote an article titled "Furious Squirrel". In that story I wrote about how a very angry squirrel came close to attacking me. Many found it hard to believe that a normal squirrel would do something like that. Some thought the behavior wasn't normal and maybe there was something wrong with it.

That hostility the squirrel showed towards me was perfectly normal behavior by any squirrel, and the squirrel was a very normal little forest creature. He had no diseases or dementia. He was just a squirrel. I know that many people think of squirrels as fuzzy little bushy tailed animal friends that like to come up and beg for breadcrumbs and nuts. And you are actually somewhat correct if that's what you think, but that is actually the same thing that makes them seem so mean at other times.

I want to let you know right now that squirrels are some of my very favorite little creatures. You can find a very large population of them all around where I live. They are fun to watch. They do some seemingly very comical things. I have spent a lot of time laughing at their cute little antics. But there's a reason that the word squirrely also means crazy. The word nuts also means crazy, probably because nuts are associated with squirrels. 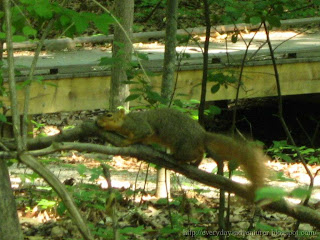 One of the things you have to remember is that squirrels, despite being so darn cute, are still wild animals. They also share a large part of their habitat with us humans. They see us every day, so they aren't as afraid of us as some other creatures might be. That's why neighborhood squirrels are so willing to come right up to us and sometimes beg for food.

It's also the very same reason why a forest squirrel would be brave enough to threaten to attack a big human, such as myself. A forest squirrel is much more likely to be angry with us because while they still see us very often, we are invading a space that they don't share with us as often as our neighborhoods. The forest is their home, not ours. They see us as trespassers. There are also other forest creatures that behave in this same sort of way.

I have told many stories in the past of my encounters with squirrels, so if you look through my archives at The Everyday Adventurer you'll see many different types of behavior from them. Some do get very angry. Some come running curiously to see what I'm doing. And others are very friendly and don't mind me at all. I've also had very similar experiences with deer, some threatening to attack me because I was in a place they claimed as their own. 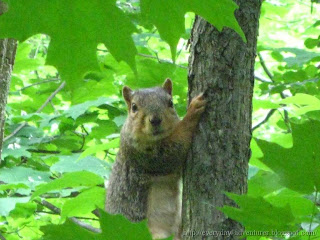 I once witnessed an incident where a tribe of squirrels worked together to fight off a hawk that wanted to eat them. This demonstrates a level of intelligence that even I didn't expect. So while we think of squirrels as maybe crazy, or just dumb animals, they are very intelligent and they have reasons for the things they do. I don't always know those reasons.

The one thing I do know is that they have emotions. They feel happy and sad, or even angry. They are just creatures trying to live, just as we are trying to live. While it's a fun thing for us all to watch these funny little creatures, it's also wise to give them their space. They are wild animals. Any wild animal can be unpredictable. Any might attack you for reasons you don't understand.

So show the animals some respect while you try to move in for a photo. I sometimes get very close, but I know when to stop or when to back off, even if I don't always explain that clearly. You can get close, but just watch them for danger signs. I hope that explains just a little bit about our bushy tailed little friends. What do you think?

We are always looking for writers who can contribute entertaining and original articles about nature. Submitting an article on Nature Center Magazine can help to promote your own website or blog.
Click Here For Details
Nature Tips