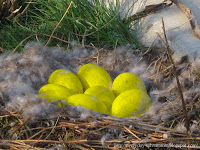 How far would a person go to get a golden egg? How far would you go? In this little fiction story from The Everyday Adventurer we find out just how far one person went in his wayward attempt at getting a golden egg all for himself. Was he successful in his quest to capture gold? Well, you'll just have to read and find out.

It was another quiet day at the nature park today, but it was okay because I like days like this. I thought maybe I'd go down and check out the lake, since there didn't seem to be much animal activity either. There weren't even any geese swimming around, so I decided to just relax and watch the water.

After awhile, I noticed the geese were all over at their nesting area, further up the lake. Usually they come over to beg for food, but they seemed strangely quiet today. I decided since they wouldn't come to me, I'd take a few pictures of them right where they were then. They wouldn't get away that easy!

As I was looking over there to decide where best to point the camera, I noticed something odd. There was a glint of the color gold in the weeds, just to the right of the geese. At first I thought nothing of it, but as I kept looking, I noticed that the gold seemed to be in the shape of an egg.

Then I started to put two and two together. The only problem was that I kept coming up with five. I remembered the story of the goose that laid the golden egg, but I knew it was only a fairy tale. Fairy tale or not though, I seemed to be looking right at a golden egg myself.

My mind started to race. I began to think to myself over and over, "Gold! Gold! GOLD!!!" I needed to climb a hill to get close to that end of the lake and the golden egg. So I ran up the hill so I could get what I now convinced myself must be an actual golden egg.

I reached my destination, and I was now standing at the top of the hill looking far down at the place where the geese were nesting. I guess I was going to have to climb down there if I was going to get what I decided was now rightfully mine. I was going to be rich!

As I began to move forward, I felt a push from behind! I now found myself tumbling all the way down this thirty foot slope. I think I landed on every tender place on me that there could be! What seemed like hours took only a few seconds, and I had bounced to a halt at the edge of the lake.

I was surprisingly unhurt. After I stood up, the first thing I did was look back up the hill to see who pushed me. It better not be a squirrel! I quickly saw that it was no squirrel. It was that little guy dressed in green that I encountered a few weeks ago.

As he looked down at me, he yelled, "I know what yer after! That's my gold, and you better stay away from it!" I wasn't going to take that from a runt! No leprechaun could stop me. I turned toward the golden egg, with the intention of claiming my new prize. As I looked for it again, I quickly realized that it was gone!

The geese were still there though, and they didn't look happy with me. I was done starting wars with animals, so I turned and quickly left them in peace. I went as fast as could, right back up that hill. I was going to get that leprechaun this time! 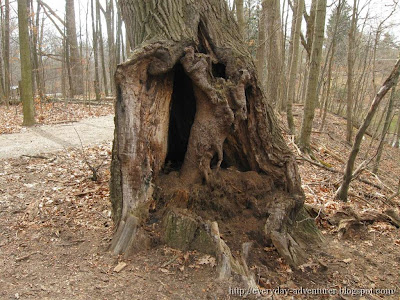 I finally made it to the top, and I stood there trying to catch my breath. Then I saw the little jerk leprechaun standing a short distance away grinning at me. He had the egg! That egg was almost as big as him, but he held it as if it weighed nothing. He was bouncing it from one hand to the other.

I wanted to get that egg! I had to catch him and take it from him! I quickly( well, almost quickly) moved towards him, and he turned and ran! He was heading straight for the tree that he jumped into the last time I chased him. I made it in there before, so I didn't think he could escape like that. I just wish I could remember what happened after I got in there last time.

I laid there for a minute realizing that the cartoons are right. You really do see stars when you crack your head. I slowly sat up trying to focus my eyes. I noticed that I was several feet away from the tree, and I couldn't quite stand up yet.

As things started to come back into focus, the leprechaun came back out of the tree. I thought maybe he was going to make sure I was alright. But then he did something else. He turned away from me, dropped his pants, started laughing hysterically, and he was now moving his butt from side to side! The little jerk mooned me!!!

I was furious! I started to get up but my legs were still limp from my collision with the tree, so I flopped back down to the ground. The leprechaun, still laughing at me, then slowly raised his pants and calmly walked back into the hole in the tree. I knew I wasn't going to catch him now, so I was left with nothing. Zero. Zip. Nada. A big fat goose egg. Oh well, there's always next Friday.
--
If you'd like to read more work from The Everyday Adventurer go take a look at any of my three sites. I'm the editor here at Nature Center Magazine, and I also have two blogs. The Everyday Adventurer is my nature blog where I tell stories of my daily nature hikes and the things I encounter, with more photos like this one. Rat Tales is where I get to share some of the fiction that I write. No photos there though, just some very cool stories.


We are always looking for writers who can contribute entertaining and original articles about nature. Submitting an article at Nature Center Magazine can help to promote your own website or blog.
Click Here For Details
Labels: Nature Tales