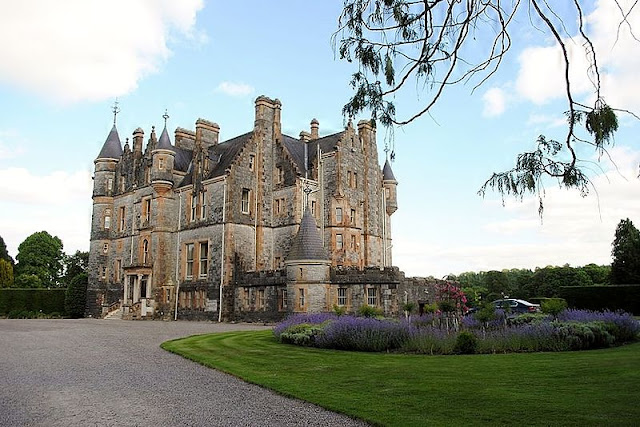 Blarney is not the oldest castle in Ireland nor is it the biggest but it is probably the most well-known. Hundreds of thousands of people go there every year. They tour the grounds and the castle. And of course they want to kiss the Blarney Stone.

The castle sits on about 15,000 acres. Probably the most popular garden to visit is the Poison Garden. More than 70 plant species are seen growing there. But a sign warns not to smell, touch, or taste any of them. They are all poisonous.

The most dangerous plants are enclosed in black iron cages to keep them and us safe. Some of the flora there are henbane, cannabis, wormwood, hemlock, mandrake, opium, ricin, and wolfsbane. Many are labeled and some tell of the medicinal uses they once enjoyed.

The Herbaceous Border is about 100 yards long. It runs along a stone wall. There is a rose pergola for most of the length. It is the ideal spot for a nice stroll.

The Irish Garden is a recent addition. It is next to the Poison Garden. It is meant to show off some of the native plants of Ireland. It is also there to preserve those native plants.

Buried beneath briars and ivy the Icehouse was discovered recently. It is circular in shape with thick high walls all made of stone. It would have been used like we use a refrigerator today.

The Druids formerly used the Rock Close. Here you will find rocks, huge boulders, magnolia trees, Weeping willows, Japanese bamboo trees, and Siberian dogwood. There is a stream that has a small bridge so you can walk across.

Some of the rock formations have names like Witch's Kitchen and Wishing Steps. There is a sacrificial altar and a dolmen (a megalithic tomb with a stone laid across upright stones).

Found in the lower Rock Close is the Bog Garden. You can pass through the Gunnera manicata ot Giant Rhubarb on a raised boardwalk.. You'll feel like you are in prehistoric times.

You will see many plants from the bog. The oldest tress on the grounds are here. There is a group of three Yews on an island which may be as old a 600 years. And at the end of the boardwalk is a willow tunnel.

Around the 21 acres Blarney Lake is a walk you can take. You will meander through woodlands and can catch sight of some of the wildlife there. You might see jays, otters, red squirrels, or swans.

The castle is also impressive. One of the places they recommend you see is the murder room. Situated above the main entrance it was used to get rid of unwanted "guests". When someone came in that was not welcome they would have rocks or hot oil dropped on them through a hole in the floor.

Now we come to the big attraction... the Blarney Stone. To kiss the Blarney Stone will give you the gift of gab. It is the ability to talk your way out of a "sticky situation". Testing shows that the stone is a piece of 330 million year old limestone from southern Ireland.

There are many tales concerning how the owner of the castle came to own the stone. My favorite is that Cormac MacCarthy who was King of Munster was returning from war. He came to a river and saw someone struggling in the water. He saved the woman who turned out to be a witch. Her gratitude was so great that she showed him the stone and told him of it's special powers.

He had the stone taken to where his castle was being built. The stone was to be placed in a place where it was accessible but not easy to steal. It was set in the wall just below the battlements at the top of the castle.

In order to kiss the Blarney Stone they used to hold the ankles of the person wanting to kiss it and lower them so they were in position. Now they have installed iron bars for you to hold on to. There is still someone to hold you in place but it is around your middle as you lie sort of flat on your back. You then bend over backward as far as necessary and kiss the stone. You too can have the gift of gab.