The Mystery Of The Blood Red Bugs 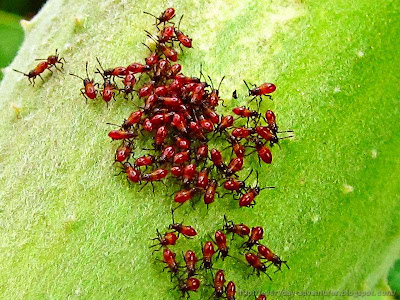 I took pictures of some milkweed plants while I was out on another everyday adventure back some years ago. I saw milkweed plants before that, and have talked about them here in the past many times. I wanted a small update for myself because I've always liked milkweed.

When I got back home and examined the pictures from the day, I got a little surprise. That seems to happen to me a lot. I was checking out the pictures of these milkweed plants, when I saw these little blood red bugs crawling all over some of them.

I examined the pictures very closely. I zoomed in to see as much as I could. You can see the discoloration of the pod that they're on in the last picture. I'm assuming it's either dead or dying. In one place to the top of the group of bugs, one bug is seen boring right into the side of the seed pod. A little on the lower end there is a bug already embedded in the pod.

What were these bugs? I was fascinated by them. I was, and still am, a little repulsed. They're feeding on, and even destroying my beloved milkweed plants! I had to find out what they were. I decided to search everywhere I could, with every resource I had. I think I found the answer! 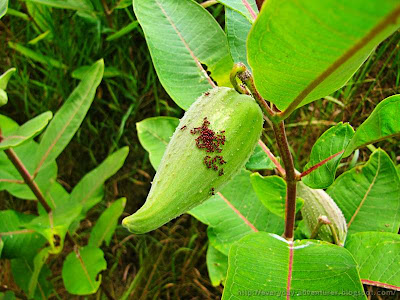 These bugs are called Small Milkweed Bugs (Lygaeus kalmii). I wasn't at all sure at first, because the pictures I saw didn't look quite the same. The pictures I found showed something that was more orange and black, instead of these blood red things.

As I did further research, I found that these are the only insects that eat from the pods. They like the taste of the seeds apparently. I also found out that the nymphs (young ones) are red just like in my picture above. As they grow older, they grow more orange and develop black areas.

These bugs can be found in large numbers on milkweed plants. They mate right on the plants. They also feed on the seeds late in the season, which would be right around October when I took these pictures that year. They also suck the nectar from the flowers of various herbaceous plants. In the spring they are also reported to be scavengers and predators, since milkweed seeds are scarce.

The only thing that confused me was that these appear to be nymphs. I thought before that I would only see them earlier than now. But I found out more.The adults lay their eggs on the milkweed in the spring, and they have sometimes more than one generation in a year. That would likely solve my nymph mystery. 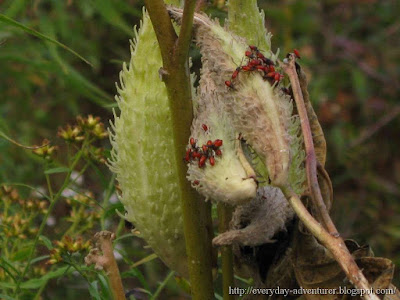 As to the noticeable red coloring of the small milkweed bugs. This coloration and the fact that they don't seem to move around very quickly, tells us something about them. After feeding on the poisonous milkweed seeds, these bugs have themselves now become poisonous. They are immune to any poisons from the plant, but any potential predator is not. The red coloration is a warning for predators not to eat them.

Well there you go. That explains what these blood red bugs are. This article is now the best place on the internet to find information on Small Milkweed Bugs. I have gathered together more information on them than any other website I have found so far. It's my gift to you. If you can show me otherwise, I'll post new information and give you credit.

Another mystery solved by The Everyday Adventurer. I'm just like Scooby Doo, except with an eye patch. (That last part was for my old friend Alice. I'll have to tell all of you newer readers about her sometime.)