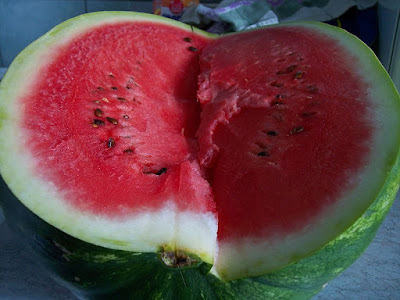 During the summer Saturday nights were special nights. The farmers came to town to purchase what they needed from the grocery store and the feed store. It was a small town so there were not many other stores there.

What we did have was the free show. The free show was a big movie screen with a bunch of benches set up for us to watch. And it cost absolutely nothing.

I got 25 cents each week for allowance. Five cents went into the collection plate at Sunday school but the rest was mine all mine. Before the show started I would stop at the store and buy a bottle of pop and a candy bar. It took half of what was left but it was worth it. Besides I would get back a penny when I returned the bottle for the deposit. That penny was worth two pieces of bubble gum.

I loved sitting outside watching those movies. It was just like being at the theater. Except we had the stars above us.

The reason the free show was there was to keep the kids busy while their parents shopped and socialized. The fire station was where the men would gather to play cards and discuss manly things. The women stood off to the side talking about children and whatever else they talked about.

We lived just a block and a half down the street from the free show so I always went. Unless it rained. Then us kids would join the adults in the firehouse.

At the end of the summer came the best day of all. It was watermelon day.

On watermelon day all the farmers brought part of their harvest to town. Someone donated a cow and someone else donated a pig. They were both roasted in a huge pit dug in the ground. They started cooking a day or two before.

Then there were tables set up. They held cooked potatoes, corn on the cob, fresh salads, vegetables, fruits, homemade breads, pastries, cookies, cakes, homemade jams and jellies... you name it, it was there. And watermelon.

After eating more than you could possibly eat, you had to go back for a huge chunk of watermelon, then another one, and so forth. It was everyone enjoying the bounties of the harvest.

There were games like sack races and other fun group activities. When the sun went down there was the free show.

The very nicest hing about watermelon day was... IT COST NOTHING. It was just people getting together and enjoying each other and the offerings from the land. It is one of my favorite memories.