You Gotta Eat Your Spinach Baby 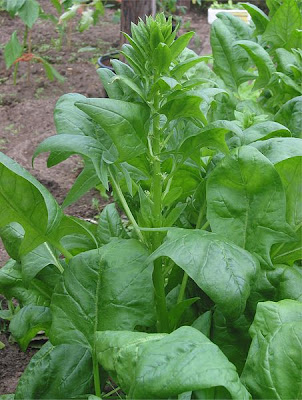 Bluto has kidnapped Olive Oyl again. Popeye pulls out his trusty can of spinach, squeezes it until it opens, and downs the spinach. His muscles pop and swell. He grabs Bluto and beats him a bit, then with one powerful blow Bluto flies into oblivion. Olive Oyl loves Popeye again and all is right with the world.

The Popeye cartoons have made spinach a popular vegetable. In fact, Crystal City, Texas, erected a statue of Popeye in 1937. Spinach is grown in Crystal City. They say that Popeye helped increase the consumption of spinach by 33% during the Depression.

In the 1930's people believed that the power of spinach was its iron content. Spinach is a good source of iron in a vegetable. One cup of cooked spinach has more than 36% of your recommended daily requirement, but the content is not as high as originally thought. The scientist who measured for iron placed the decimal point in the wrong place. He made the iron content 10 times what it actually is.

Keep in mind that spinach contains oxalates. These are organic acids that inhibit your body from absorbing some of the nutrients in foods. As always consult your doctor if you might have adverse affects from spinach. Some of the concerns are kidney stones, gout, and gall stones. Do not use spinach to treat a medical condition without checking with your physician first.

Pesticides cling to spinach leaves. It is very difficult to wash off so make sure that you get them clean before using. Growing your own is best because you will not have to use the pesticides.

Persia (now Iran) was where spinach originally came from. Traders took it to India and it
was then taken to China. Eventually it was popularized in Europe. Catherine de'Medici was especially fond of spinach. Now it is found all over the world.

Glycoglycerolipids are molecules used in the process of photosynthesis in plants. Lab research has shown that they can help protect the lining of the digestive tract from damage, especially inflammation.

Research shows that of the green leafy vegetables, only spinach showed significant protection against the occurrence of aggressive prostate cancer.

There are at least 13 different flavonoid compunds in spinach. These are antioxidants and anti-cancer agents. Studies show that they slow down cell division in stomach cancer cells. Reduction of skin cancer cells is another benefit. Consumption of spinach coincides with fewer incidents of breast cancer.

Spinach is low in saturated fat and cholesterol.

The fibers, proteins, and body building compounds in spinach are what gave Popeye his big, strong arms.

Oxidative stress is a contributor to several blood vessel related problems. The antioxidants and peptides in spinach help decrease the risk of such problems as atherosclerosis, osteoporosis, and high blood pressure.

Spinach is likely to aid in prevention of eye problems like age related macular degeneration and cataracts.

Folates, also known as folic acid make spinach a good food for pregnant women. It is good for preventing neurological defects in the baby.

Spinach helps prevent the activation of osteoclasts. They are the cells that break down bone. And bacteria in the intestines convert Vitamin K1 into Vitamin K2 which activates a major non-collagen protein in bone. Spinach assists in the strength and density of bones. Added to the calcium and magnesium in spinach to make it an excellent food for healthy bones.

With it being so full of nutrients, spinach is great for dieters. It is plentiful, inexpensive, and filling. One cup of cooked spinach contains only 41 calories. It can be eaten raw, cooked, or mixed with other foods.

DNA damage and mutations in colon cells may be prevented. Spinach does protect the colon from the harmful effects of free radicals.

A protein is spinach directly prevents calcium from forming in tissue. This fights cardiovascular disease and stroke.

The brain and nervous system benefit from spinach. It provides an essential part for the synthesis of sphingolipids. Sphingolipids is a crucial fat that makes up the Myelin sheath around our nerves.

It can help your hair look smoother and shinier.

Spinach is a mild diuretic and a mild laxative. Regular consumption of spinach can help regulate your elimination system.

It can help eliminate intestinal parasites.

Because it is nutritive, tonifying, mineralizing, calming for the nervous system and also a good coagulant, spinach benefits growth.

Medieval artists extracted the green pigment from spinach to color ink or paint.

Fresh spinach can be eaten in the same ways as you might use lettuce. Salad is a favorite for many people. A leaf or two on your sandwich is good. Shred it and use it in tacos. In southern US people make wilted spinach salad by pouring hot bacon grease on spinach. It is quite good.

Cooked spinach actually enhances some of the benefits of spinach while raw spinach fills other needs. Mix them up for maximum effect.

To cook spinach use a non-aluminum based pan. Steam the leaves with no more than the water left on them after washing. Do not wash spinach until you are ready to use it in order to keep the nutrients from breaking down as quickly. A little salt, butter, and pepper (if you like) is all you need for seasoning. However you can squeeze a bit of lemon juice on it for a variation of flavor.

Spinach is good in soups and stews. Shred it to use in pasta dishes. It adds extra flavor to lasagna. Spinach ravioli is a favorite of mine.

You can even drink spinach. Shredded leaves in hot water make a good tea. Add spinach to vegetable juices and smoothies.

Have you a favorite recipe or use for spinach? If so, please share it with us.It is in the interest of health after all.