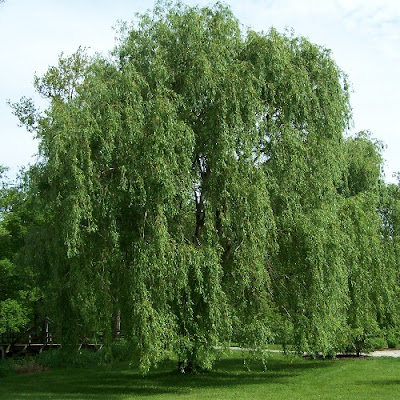 One of the women that I admire most had a huge weeping willow tree at the entrance of the drive to her farmhouse. Sadly she is no longer with us but her magnificent tree still stands. Every time I drive by her place I see that beautiful tree and think fondly of her.

As a child I would often sit with friends beneath a different weeping willow tree on hot summer days. We would each take three of the branches that hung down and braid them into headpieces to make us beautiful. If flowers were available we would weave them into the piece. The tree was on the corner of my grandmother's lot in town. It was another gorgeous tree.


01. Why are they called weeping willows?

The weeping willow once stood tall and erect. A pair of young lovers met often and sat beneath the tree planning their lives together. Tragically the two died suddenly before their wedding. The willow tree was so despondent at the deaths that they drooped over and their branches hung in sorrow. They would never again be able to lift thieir branches after that.


02. Where will I see weeping willow trees?

They are native to China. Because of the beauty of the trees they were brought to North America and are found all over the United States and Canada. You will see weeping willow trees all over the world. They are popular in the UK, New Zealand, and Africa.


03. How fast does a weeping willow tree grow?

Once the tree is firmly established (after about three years) it can grow up to eight feet per year.


04. What type of soil is best to plant a weeping willow?

Weeping willows are hardy trees. They like a water source close by but they can grow in slightly drier places. You will often see them growing on the banks of a river or stream.


05. Is there any place you should not plant a weeping willow tree?

These trees love water; the more the better. They have enormous roots and root systems. These roots look for water. That means do not plant them near sewer lines or septic tanks. Also do not plant them too close to your house. The roots are big and strong and can cause damage to the foundation of your building.


06. Are weeping willows good for anything besides to look at?

Native Americans used the bark to treat headaches. The bark contains salicylic acid which is the major ingredient of aspirin. The sap of the tree is also full of salicylic acid. Because the acid from the tree caused so much stomach upset scientists devloped the first synthetically produced aspirin.
The bark is used to make anti-inflammatory agents. It can be used to treat articular bleeding, heartburn, and other stomach ailments.
Weeping willow wood is used to make flutes, boxes, whistles, fish traps, broom handles, furniture, baskets, and cricket bats.


07. Do you ever see weeping willow trees in art?

Weeping willows are often seen as symbols for death. Therefore a painter who wishes to portray sorrow or death often paints a weeping willow. Claude Monet made a famous painting honoring the fallen soldiers of World War I. William Shakespeare was fond of using weeping willow symbolism in his writings. Even the Harry Potter series has a weeping willow called the Whomping Willow.


08. What about weeping willow trees in mythology?

It is thought that a witch's broom is made from weeping willow wood and branches. Because the branches are serpentine many mystics believe it has sexual and fertile properties. Placing weeping willow branches in the bed of a married woman is believed to increase the chances that she will conceive. Some places believe that the branches will cause her to be impregnated by magical serpents. The child will have the gifts of the gods.

In the fall or very early winter use sharp pruning shears to cut a straight piece from the tree. Cut from an area that newly sprouted within the last year. It should be 8 to 12 inches long. Use a container deep enough to hold at least half of the cutting in water. Keep it inside where it will stay warm and keep it in partial sunlight. Fill the container three quarters of the way with water and an amount of root stimulator according to the directions of the root stimulator. Do not disturb for 3 to 4 weeks. Roots will sprout. When the roots are about 3 to 4 inches long transplant to a container with soil. Do not plant outside during the winter. Weeping willows are hardy but these little shoots are just babies.
When planting outside in the spring make sure to stay away from buildings, septic tanks, and sewer pipes. Underground gas lines, electrical lines, and telephone and television cables should also be protected. Stay away from sidewalks and other slabs that could break from a large root in the future. Dig a hole about 12 inches deep and 18 inches across in unfrozen ground. Put fertilizer and top soil in the hole. Then put the cutting in with the roots just below ground level. Hold the cutting firmly in place and finish filling the hole with potting soil. Pack the soil firmly, stake the plant for support, and put a small wire cage around it to protect it from animals.
For the next few weeks keep the plant watered with a slow soaking. Remember these trees like water.
After they have firmly taken root and are starting to grow you should have very little maintenance on a weeping willow tree.


10. Is there a tree that is more beautiful than a weeping willow?