The Shocking Truth About Unicorns

I wrote this a few years ago. I was in the mood to see a unicorn today and I thought I would share this with you. I hope you enjoy it. 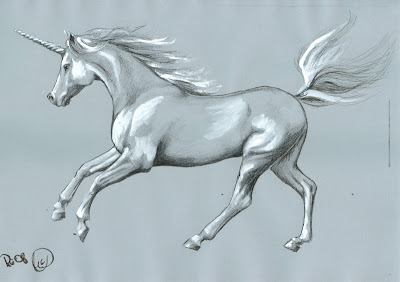 A long time ago, when the Earth was green
There was more kinds of animals than you've ever seen
They'd run around free while the Earth was being born
And the loveliest of all was the unicorn


There was green alligators and long-necked geese
Some humpty backed camels and some chimpanzees
Some cats and rats and elephants, but sure as you're born
The loveliest of all was the unicorn


The unicorn is not a mythical animal. Surprised? No mythology makes mention of a unicorn. It is considered to be a legendary animal because it is so rarely seen.

The unicorn is mentioned throughout history. Early Greeks said it was an animal found in India. China had unicorns. Unicorns are even mentioned in the Bible.

Although there are many different descriptions of this legendary animal. Perhaps some of the early scholars mistook other animals such as the rhinoceros to be a unicorn. There is a goat with one horn that people see as a unicorn and the narwhal is a marine animal with a long spiral horn like a unicorn.

The most accepted form of the unicorn is as an animal that looks like a horse with a long spiral horn extending forward from its forehead. Colors vary from black to pure white. There have been reports of pastel colors but most of those have not been verified. The coat of the unicorn has also been compared to a light emitting pearl.

The horn itself also varied in color. It may even change colors depending on mood and other circumstances. A unicorn's horn is approximately one third the height of the animal.

The mane and tail are often reported to be wild and flowing. They can shine with a bright light or maybe be a gentler softer color. A unicorn's eyes will be either deep blue or purple.

The Lord seen some sinning and it gave Him pain
And He says, "Stand back, I'm going to make it rain"
He says, "Hey Brother Noah, I'll tell you what to do
Build me a floating zoo,
and take some of those...


Green alligators and long-necked geese
Some humpty backed camels and some chimpanzees
Some cats and rats and elephants, but sure as you're born
Don't you forget My unicorns"


Unicorns live all over the world. They are wary of human animals so they are seldom sighted.

Unicorns tend to live in small groups. There is an elder who has lived for hundreds of years. A couple and their offspring, usually one or two, live together.  Any size group of unicorns is called a Blessing.

Occasionally two or more Blessings will join together for a small period of time. They romp and enjoy the company until they go their separate ways.

There are two thoughts on how baby unicorns are made. Some say the known mating methods of the rest of the animal world are used. Some others say that because unicorns were made by the gods, unicorn couples go in search of a baby unicorn that was dreamed by one of the gods. When they find the baby it becomes theirs and a member of the family.

What do unicorns eat? They have been seen grazing on much the same foods as horses. It has also been said that they do not need to eat because they were made by the gods, so they graze to preserve an image.

The only way to approach a unicorn is if you are pure of heart and mind. Many believe that only a virgin possesses those qualities.  That is why a virgin is often used as bait to capture a unicorn.

Old Noah was there to answer the call
He finished up making the ark just as the rain started to fall
He marched the animals two by two
And he called out as they came through
"Hey Lord,


I've got Your green alligators and long-necked geese
Some humpty backed camels and some chimpanzees
Some cats and rats and elephants, but Lord, I'm so forlorn
I just can't see no unicorns"


Unicorns have magical properties. The meat, hides, hooves, hair, and many internal organs are used as medicines. Anything made with these items should protect the person using them from disease.

The horn, called alicorn, is the most potent part of the unicorn. If a unicorn dips it's horn into a body of water, the water will be free of impurities and safe to drink. The knowledge of this encouraged drinking vessels to be made of unicorn horn. Kings and queens use them to prevent poisoning of their drinks. It is the gift of goblets made from unicorn horn that royalty from one country might make to royalty of another favored country.

Powdered unicorn horn is used to purify water. It is used in medicines and potions. These medicines should repel or cure any communicable disease. The powder is also a powerful aphrodisiac.

The royal throne of Denmark was made from unicorn horns. Queen Elizabeth I received a prized gift of a unicorn horn and proudly put it on display. Marco Polo claimed to have seen unicorns in Java.

Coins have been made honoring unicorns. Early drawings and tiles have been discovered with unicorns as the subject.

And Noah looked out through the driving rain
Them unicorns were hiding, playing silly games
Kicking and splashing while the rain was falling
Oh, them silly unicorns


There was green alligators and long-necked geese
Some humpty backed camels and some chimpanzees
Noah cried, "Close the door because the rain is pourin'
And we just can't wait for no unicorns"


Unicorns are in the news once again. Archaeologists in Korea have found a unicorn lair. It is called a lair because that is what the carved rock in front of iit calls it. The carvings are dated at 918 to 1392 AD.

The ark started moving, it drifted with the tide
The unicorns looked up from the rocks and they cried
And the waters came down and sort of floated them away
That's why you never see unicorns to this very day


But you'll see green alligators and long-necked geese
Some humpty backed camels and some chimpanzees
Some cats and rats and elephants, but sure as you're born
You're never gonna see no unicorns


The lyrics above were written by Shel Silverstein  and sung by The Irish Rovers. It tells why we never see unicorns today. But wait... there is more. Andrew McKee has written another verse to give us hope.

Now you might think this is the ending to the song,
But I'll have to tell you friends that in fact you're wrong
You see, Unicorns are magical, so when the rain started pouring,
They grew themselves some wings and they took to soaring.


You'll see green alligators and long-necked geese
Some humpty backed camels and some chimpanzees
But if you're looking for the unicorns, don't be forlorn,
The second star to the right and straight on until morning.