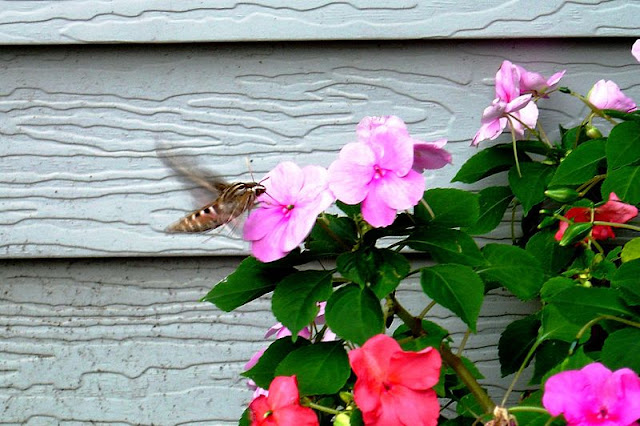 It was another exciting evening at our house.The ballgame was over on TV. (We won!!) My son had let the dog out to bark at the dark.

She (the dog) finished letting the whole town know she exists and is ferocious. She was ready to come back inside. My son opened the door to let her in.

Then he hollered, "A big moth just flew in! That's the biggest moth I ever saw!"

I had not seen anything but he kept saying, "There it is."

Hummingbird moths are called that because they behave much the same as a real hummingbird. You can see them hovering over flowers collecting nectar the same way hummingbirds do.

There are several species of hummingbird moths. In Europe they are called Hawk Moths or Sphinx Moths. They are of the Sphingidae family. In the United States they are of the genus Hemaris.

The hummingbird moth moves and flies just like a humming bird. They hover above a flower to be able to insert their long tongues into the flower to drink the nectar ust like a hummingbird. If it is quiet enough and you listen carefully you can even hear the hum caused by their wings moving so rapidly.

Hummingbird moths are often mistaken for real hummingbirds even though the moth is smaller. If you look closely you will see that the feathers that seem a little out of place on the head are actually antenna. And you will probably not be able to get that close to a hummingbird because it will flit away.

Hummingbird moths are sort of plump rather than the sleek look of a real hummingbird. The moths have a tail that opens into a fan.

They have scales instead of feathers. Sometimes the scales are lost from the wings as in the case of clearwing hummingbird moths. Some have stripes similar to a bumblebee.

The wingspan of a hummingbird moth is from 2 to 3 inches. The length of their bodies is 1 to 2 inches.

Hummingbird moths can be seen during the day but prefer the night . They especially like early evening when the sun is setting or has just set.

The moth is a pollinator and likes many of the same flowers a hummingbird likes. But it seems to prefer flowers that are less bright in color. Hummingbirds like the brighter colors.

The larva of a hummingbird moth is a green caterpillar. They feast on the leaves of plants not the flowers. Then they go into the pupa stage in a loose cocoon partially hidden by leaf litter. They lay dormant all winter and hatch when the weather turns warm again.

My son finally decided to take a plastic gallon ice cream container like the one he uses for water for the dog. He captured the moth by enclosing it against the wall and covered the plastic container with an aluminum pie pan. When he took it outside he released the hummingbird moth and off it flew.