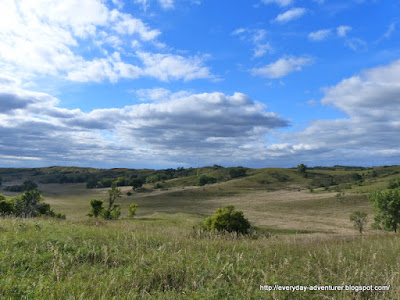 The Loess Hills are unique to Iowa in the Unite States. They give a glimpse into the history of the way the land of our country was formed.

Loess is a German word meaning loose or crumbly. It is pronounced luss.

The last glacier that descended onto North America ground the rocks into "glacial flour". That is a very fine powder-like sediment.

As the weather warmed and the glacier receded the "glacial flour" was washed away by the rivers and eventually deposited on the flood plains of the Missouri River. Then the air dried and the winds came. Those winds blew large amounts of the silt back up the way it had come down.

Some of the dust clouds deposited coarser and therefore heavier particles along the Missouri flood plain. While silt was blown everywhere When it fell next to the river it formed sharp high bluffs.

Scientists believe that there were three major waves of dusts clouds over the centuries. With each wave the hills grew and became the Loess Hills. The first layer is known as the Loveland Loess and is aproximately 120,000 to 159,000 years old. The Pisgah Loess is 25,000 to 31,000 years old. The the Peoria Loess is 12,500-25,000 years old.

Between the layers the history of the area shows many changes. For instance in some places the is a fifteen inch layer of volcanic ash. This is from volcanic activity in nearby Yellowstone.

The Loess Hills range from lower Iowa up to Westfield, Iowa, where I live. The only comparable hills in the rest of the world are found in Shaani, China. The hills in China were actually higher at one time but erosion and agriculture have taken away from the qualities we still see here in Iowa.

So hills made from loess are extremely rare. The Loess Hills are constantly evolving and changing. In the beginning they were smooth much like sand dunes. Now the water and wind have caused erosion. Loess soil has little or no clay particles so the soil erodes quickly.

There are several federal and state parks located along the Loess Hills. We would like to preserve them as much as possible.

Stone Park is the nearest state park. It is located in Sioux City on the northwest edge of town. It has hiking trails, picnic areas, a small lake, and driving trails. There are campgrounds too.

Hickory and oak trees are native to the Loess Hills. Red cedars like the environment there too and are threatening the stability of the soil. Prairie grasses found in the Loess Hills include big bluestem, little bluestem, pasque flower, yucca, Indian geass, lead plant, and sideoats grama. The prairie Moonwort was discovered in 1984.

There are many birds and animals native to the Loess Hills. The great plains skink, badger, bobcat, spadefoot toad, white-tail deer, red and gray foxes, coyote, pocket mouse, and box turtle. Prairie chicken, bobwhite, red-tailed hawk, ringneck pheasant, prairie rattlesnake, wild turkey, mule deer, gray wolf, elk, bison, and even mountain lions. Some of these are being kept in preserves of the Loess Hills to allow them to live in natural habitat.

This part of the United States is also important to bird migration. When winds blowing across the floodplain hit the Loess Hills thermal updrafts are formed. Raptors use these updrafts to travel to and from breeding grounds. Some of these are osprey, bald eagle, Swainson's hawk, re-tailed hawk, ferruginous hawk, Cooper's hawk, sharp-shinned hawk, American kestrel, peregrine falcon, and northern harrier.

Raptors form "kettles" which is a funnel-like formation to use the thermal updrafts. The Broken Kettle Grasslands in the northern Loess Hills holds Iowa's only home to nesting black-billed magpies.

All along the Loess Hills are hiking trails and places to camp. There are also preserves many of which have been donated by families to preserve the hills they love so much. You will find signs in the middle of a little fenced-off plot of prairie grass for instance. You cannot explore many of these but they are nice to look at.

During the Woodland Period from 900AD to 1300 AD the Glenwood Culture lived in Mills County in southern iowa. They lived in earth lodges. They were farmers and grew fields of the native plants found growing in and around the Loess Hills.

When Lewis and Clark were on their expedition they held their first formal meeting called a council with the Native Americans. The city of Council Bluffs, Iowa, honors that council meeting.

Sgt Charles Floyd was a member of the Lewis and Clark Expedition. He became ill with what many historians believe was a ruptured appendix and was the only death of the whole expedition. He was buried on a bluff in the Loess Hills overlooking the Missouri River. His monument is the first designated National Historic Landmark in the United States.

Looking out over the Missouri River at the other edge of Sioux City is War Eagle's Grave. The monument honors a native American who was admired by the people settling in the area. The Loess Hills showcase all of these and more.

When the Mormons were on their way to finally settle in Utah they traveled through Iowa. One of the elders broke away from the main wagon train and led 50 or 60 families to Kanesville which was renamed Council Bluffs. They then moved on and founded Preparation which was a town named for "School of Preparation for the Life Beyond".

The elder saw the value of the fertile land of the Loess Hills and published a newspaper article telling the faithful to sign over their deeds and possession to him. He became Father Ephraim. When people decided they wanted their property back he escaped.

Claims have been made that the notorious James gang used Joy Hollow near Westfield as a hideout for a time.

Abraham Lincoln visited the Loess Hills. Fairview Cemetery in Council Bluffs was where he was briefed on possible locations for the First Transcontinental Railroad.

All along the Loess Hills are museums. You can find animal fossils and pelts. Arrowheads and stone tools are on display. Wildlife is abundant. And if you want scenery all you need to do is open your eyes... there it is.