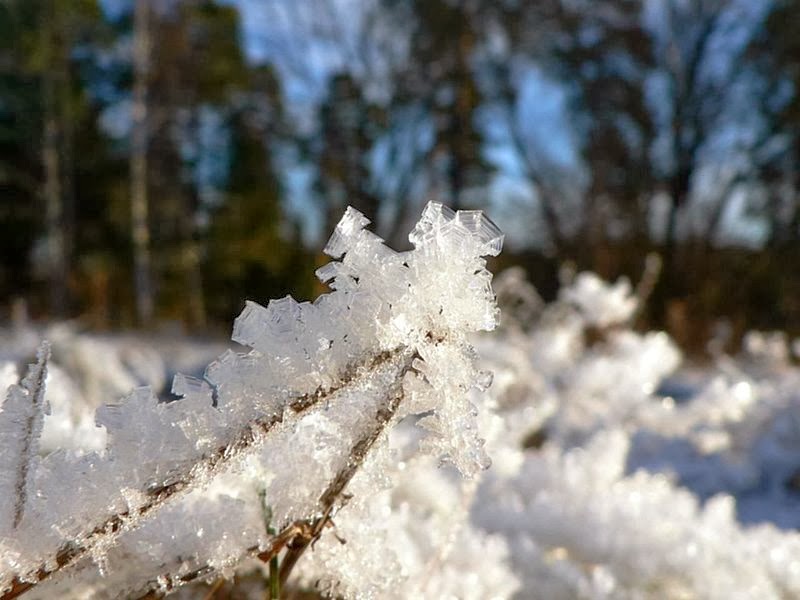 We have all heard of earth quakes. Some of us are familiar with ice quakes. If ice quakes are new to you, you can read about them by clicking this link to The Everyday Adventurer. Now we are hearing about frost quakes.

It has been a cold winter. Parts of the United States that usually stay warmer at this time of year are experiencing extremely cold air and a lot of snow. Besides the snow we also get frost.

Frost is formed when a solid surface is chilled below the dew point of the surrounding air. The surface is also colder than freezing. Tiny spike-like particles of ice then grow out from the surface making frost.

Precipitation is water that falls from the sky. It might be in the form of rain, snow, sleet, or hail. Eventually that water is absorbed by the ground to replenish the earth's water supply. So there are veins of moisture in the ground. Some are quite large while others are no more than little spider veins.

Water expands when it freezes. In the good old days a bottle of milk left by the milkman on the back step would freeze. The milk would rise as it froze and lift the little cardboard topper right off the bottle. That was why it was so important to get the milk in as soon as possible.

Occasionally the frozen ground water swells so much that it needs more room. The result is a loud explosive sound. Some people compare it to thunder, fireworks, or even bombs.  The ground will shake similar to when there is an earthquake.

This action is called a cryoseism. They have measured as high as 1.5 on the seismograph, the same machine used to measure earthquakes. As a matter of fact it is hard to tell the difference between a cryoseism and an earthquake. The conditions of the ground and the surrounding weather are used as a guide.

Sometimes the frost quakes cause serious damage. Fissures in roads and cracking of building foundations are only two examples.

If you hear noises that sound like someone throwing snowballs at your house; if you see little flashes of light; if the earth shakes a bit now you do not have to be afraid. It might be nothing more than a frost quake.