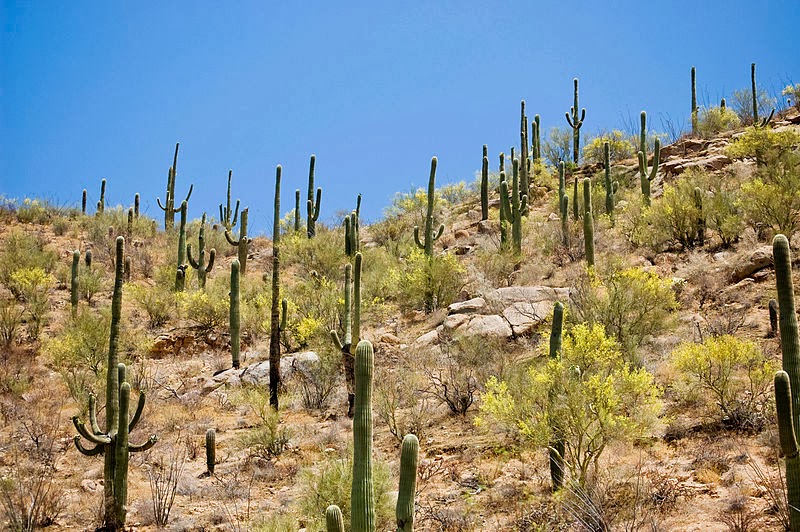 When you hear "saguaro cactus" most people think of that lone sentinel sitting in the middle of the desert. At least that's what you see in the movies. And what do they use that one lone saguaro for? Why to tie the good guy or the maiden in distress to, that's what.

You'll see when you read on why those poor folks would probably not be standing bravely tied to the saguaro. I'm going to answer ten questions about the saguaro cactus.

It is a large tree-like cactus that grows in the Sonoran Desert. The name saguaro (pronounced sah wah roh) is believed to be derived from Spanish that was derived from Mayan.

A saguaro cactus starts out as a shiny black seed no bigger than the head of a pin. As an adult they can be 50 feet tall or more and weigh up to 8 tons.


03. The desert is dry. What holds the saguaro upright?

Saguaro cactus has a unique root system. There is one very large tap root that goes straight down to find underground water. It can be up to 5 feet long but is usually closer to 2 feet. Then there are thick radial roots about a foot long. Thinner radial roots are about as long as the saguaro is tall. The radial roots are closer to the surface of the ground to pick up any precipitation.

The adult plant is usually a tall trunk-like plant with "arms" that point up. Some saguaro are crested and don't grow arms. There can be as many as 25 of these arms on one plant. Often they grow in what are called saguaro forests.

Like all cactus plants the saguaro absorbs and stores water from any source available. The more water it contains the bigger around the plant is. Then it uses the stored water during dry times. As the water is used the saguaro shrinks in girth.

Like most cactus the saguaro has spines. The saguaro has vertical ridges. The ridges help the plant to change size by expanding and receding depending on the amount of water held by the cactus. At the round between the ridges are the spines. There is a central spine that is long and hard surrounded by smaller more flexible spines. The long hard spines point downward to help reflect rain to the base of the plant. The softer spines can be very irritating to the skin. Another purpose of the spines is protection from animals.


07.  Does the protection from animals work?

Most of the time the cactus spines prevent animals from getting to the cactus. The spines are sharp and hard. But a few birds have managed to invade the defenses. Woodpeckers often manage to peck soles in them. Then other birds nest in the holes. Some desert rodents also get to the bottom of the plant to nest. 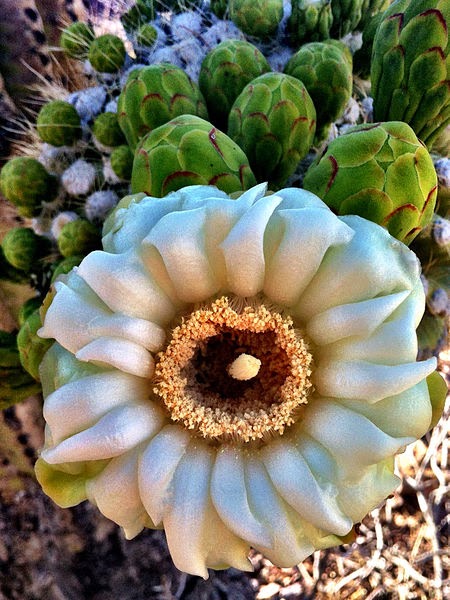 08. Does the saguaro have flowers?

Yes. They appear at the ends of the arms. They are closed during the hottest parts of the day. They open up at night and early morning. When they are pollinated, usually by bats, they create small clusters of fruit. 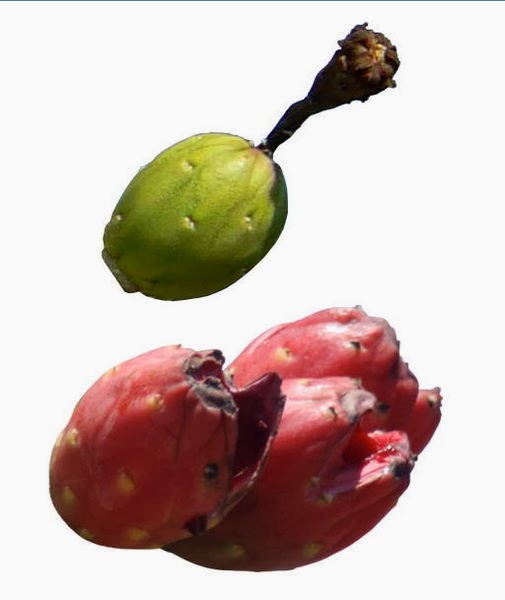 Yes and it is delicious. The fruit is ruby red and about 2.5 to 3.5 inches long. It is ripe in June. You can't pick it by hand so use a long pole. The Tohono O'odham tribe uses a fermented drink made from the fruit in a ceremony to call forth the rain.

Each fruit produces about 2000 seeds to continue the growing of more saguaro. A single saguaro cactus can produce as many as 10 million seeds in a lifetime.

Only by guessing. For instance the first arm on a plant appears when the plant is about 75 years old. Saguaro cactus plants ca n live to be around 150 to 200 years old as near as we can tell.

The saguaro cactus is not endangered or in danger yet. But Arizona has laws protecting them because civilization is encroaching. Besides losing space people want to have them as "pets". Just remember that it's illegal to dig one up.