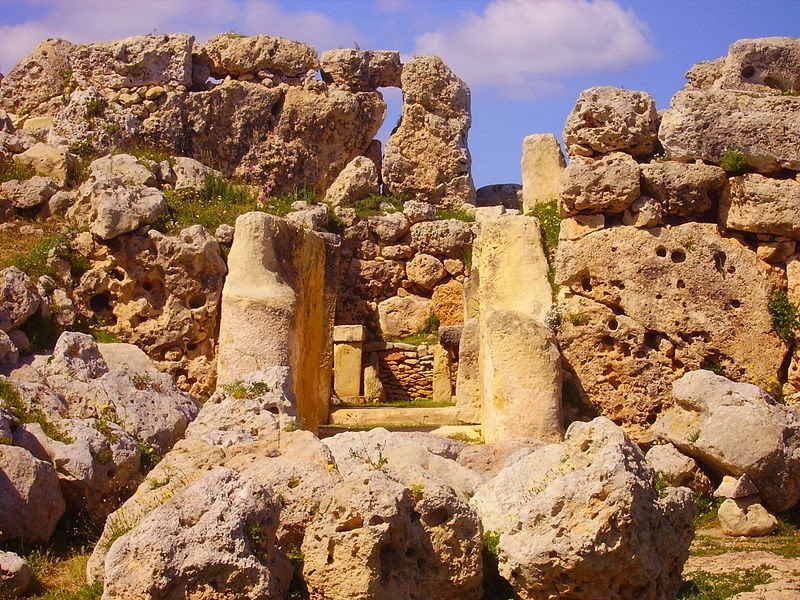 On the island of Gozo in the Mediterranean is where you will find Ggantija (pronounced gii-gan-tii-ya). Ggantija translates to mean Giant's Tower.

Local Gozitan legend says Ggantija was built by a giantess. Her name was Sunsuna. She built the temple in one day and one night while nursing her baby. She gathered rocks from around the island to make herself a home.

Ggantija is at the end of the Xaghra plateau. As with all the megalithic temples in Malta it faces southeast. There are two temples built in a cloverleaf shape. There are vaults or apses in each part connected by a large passageway. Archaeologists believe these apses were covered by a roof but time and weather has made them open to the elements.

At the entrance is a huge stone block with what appears to be a station for spiritual cleansing before entering the temple. Animal bones found around the altars in the apses indicate that animal sacrifices were made to the god or gods of the temple.

There are round ritual rooms. It is thought that these rooms symbolized re-entering the mother's womb for the priestess. Exiting was a rebirth.

The doorway slabs have round holes carved in them. Maybe they were used to secure rods for curtains or screens. Some of the floor slabs have holes to hold liquid offerings. There are reddened stones from sacred fires.

There are statues of full figured goddesses. Many fo the other artifacts have been lost. There are some that are kept in the museum. When the area was cleaned the first time much of the debris was just carted away. It was not examined to see if there was anything of value so whatever was there is lost to history.

At the time Ggantija was built the natives of Malta did not have the use of metal tools. In fact the wheel had not been discovered yet. To move and place the huge blocks of stone took some ingenuity.

There are round rocks scattered everywhere. That is indication that they were used as bearings to roll the stones from one place to another. How they raised and placed the stones is not completely clear. There are still small bits of the mortar used to seal the rocks found in crevices of the walls.

Ggantija was possibly used by a fertility cult. Many of the artifacts that have been recovered there indicate this as well as local legends.

There may have been a priestess on site much like the oracles at Delphi. While in a trance she would become possessed by the goddess and make prophesies. She may have also performed healing.

In 1980 the Ggantija temples were named as a UNESCO World Heritage Site. In 1992 the title was expanded to include the other megalithic temples and renamed as The Megalithic Temples Of Malta.