Is It A Faun Or A Satyr? 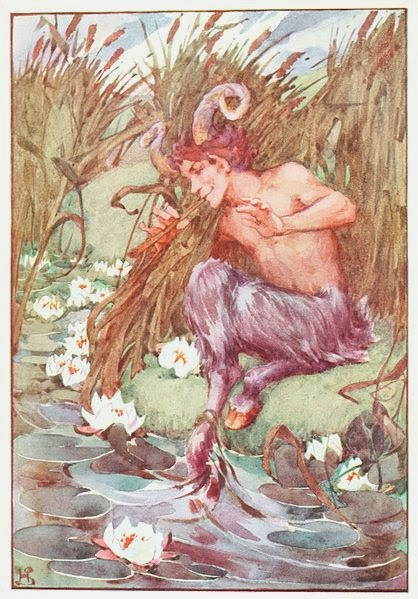 Just what is the difference between a faun and a satyr? It depends on your point of view. In mythology a faun is a Roman creature and a satyr is a Greek creature. Some say they are nearly identical. Others say that a faun has the hooves of the goat while the satyr has human feet. Some reverse it. I have always pictured fauns as being more youthful and innocent. Satyrs are fiercer and more sexual. Until I come across one I can only go by what others say.

Basically fauns and satyrs are both combination creatures having the torso of a human and lower half of a goat. Usually the head will have horns or at least lumps resembling horns. Often a faun will have the torso of a young man. The hair on his chest is finer and more sparse. The satyr has dark thick chest hair. His torso is muscular and his shoulders broader like a more mature man.

Both creatures have beards. The faun has a scruffy thin little beard that looks like the first try of a teenage boy growing his first goatee. The satyr has a full dark beard associated more with an older more experienced man. Fauns are a little foolish but satyrs are more intelligent. Satyrs are gluttons while fauns just want to have fun.

The lower half of a faun is that of a goat. It is covered with fur and the legs end with cloven hooves. Sometimes the faun has been described as having human legs and feet with the hair and tail of the goat The satyr is also the lower half of a goat although some people describe it as being from other animals. The satyr is also known to have larger than normal genitalia.

The parentage of these man/goats is usually explained as a union between a king and a nymph of some sort... it depends on the tale. How that translates into a half man/half goat I don't pretend to understand. I can only believe that they know more than I do.

Fauns are usually thought of as fun loving forest dwellers. They have a flute they play. They dance and in general just have a good time. Satyrs also like to party. But they are the wine drinkers and they are chasers of women.

The most famous faun is Pan. Pan is a fun loving creature. He plays his flute made of hollowed reeds while he dances with the nymphs of the woods. It's his greatest joy and he never gets tired of it.

Pan is thought to be the son of Hermes and Dryope although some sources think his mother might have been Penelope.

Sometimes at the order of the goddess Rhea he will incite panic, mindless fear, or age. He has been known to tear people apart.

Pan watches over flocks, forests, mountains, and all wild things. He is said to be gentle most of the time. It is said that Pan talked Psyche out of committing suicide when Eros didn't return her love.

He can protect travelers through the forest. Some legends tell of him being a healer of epidemics. He gives the cures to people in dreams. Some see him as an oracle. Still others say he was a sea-god known as Haliplankltos.

Pan is married to Aix. He has many children. Twelve of them are panes or part goat like their father.

In literature and other arts fauns are plentiful. Probably the most famous is not a faun at all. It's Peter Pan named after Pan himself. Peter Pan is known as "The Pan". He plays his flute and wants nothing more than to frolic all the time.

Satyrs are thought to be the offspring of Hermes and Iphthima although Silen claims to be their father.

The satyr also plays a flute. They carry the thyrsus of Dionysis which is a staff made of giant fennel covered with ivy leaves and topped with a pine cone.

They dress in animal skins and wear wreaths of ivy or fir. Satyrs live in forests and fields. WhenI was looking for famous satyrs the one I found was... you guessed it... Pan.

So is it a faun or a satyr. It all depends on your point of view. Until I come across one I can only go by what others say.