Wonders Of The World: Angkor Wat 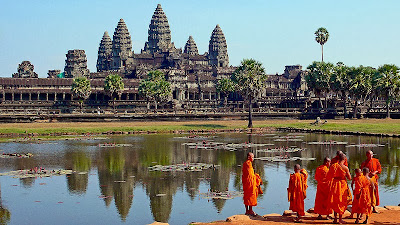 Angkor Archaeological Park covers 250 square miles in northern Cambodia. It includes forests and areas where people still live. Inside the park are the remains of several capitals of the Khmer Empire from the 9th to the 15th centuries. One of them is the largest pre-industrial city in the world.

The Angkor Archaeological Park is one of the most important archaeological sites in the world. It includes Temples and sculptures. There might also be some significance to the placement of the temples.

It is a UNESCO World Heritage Site and is on the List of World heritage in Danger. Most of the reasons are because of looting, a declining water table, and unsustainable tourism.

There is no place to stay in Angkor. There are sometimes vendors to sell food and beverages. Their prices are usually inflated but they can be can be haggled down to a reasonable price. Many of the vendors are people who live in the area but are not allowed to farm anymore.

There are hundreds of temples here. Many are thought to be built as tributes to one of the kings or another, usually by the king himself. Angkor Wat is the largest of the temples. In fact it is one of the largest religious monuments ever built anywhere.

It was built somewhere  between 1113 AD and 1150 AD. It covers about 500 acres. It is made of towers and large rooms. There is artwork all the way through. Angkor Wat means temple city.

Angkor Wat was built by King Suryavarman II in Yasodharpura which is now Angkor. Yasoharapura was the capital of the Khmer Empire. Angkor was Suryavarman's state temple and most believe it was his mausoleum. It was also dedicated to Vishnu. Shaivism was the previously practiced religion of the kings.

Angkor Wat is the best preserved temple and the only one to be a significant religious center since it was built. Now it is a Buddhist temple. It is a symbol for Cambodia and appears on the national flag.

Angkor Wat is located at 13.41 degrees north in latitude. The north/south axis of the central tower's chamber is 13.43 cubits long. Because the Khmer knew that the earth was round they knew that when they placed the statue of Vishnu in the center of the tower he was sitting on the axis of the world.

The temple and its grounds are surrounded by a moat. It is 650 feet wide and 13 feet deep. The inner perimeter is more than 3 miles. The size of the moat helped stabilize the foundation of the temple by preventing groundwater levels from falling too low or rising too high.

The entrance is guarded by great stone lions. There is an eastern entrance that was probably used by servants and merchants delivering wares.

The temple itself is on three tiers. The second rises above the first and the third above the second. The center of the temple has five towers. The center tower is 213 feet tall. At each of the four corners is a smaller tower and a series of enclosure walls. The pattern is designed to represent Mount Meru the home of the gods of the Hindus.

The central tower was also the symbolic center of the nation. It was the actual center where secular and sacred power joined forces, according to researcher Eleanor Mannikka. From there the king and Vishnu ruled over the Khmer people.

There were a dozen lunar alignments with the towers of Angkor Wat. The temple served in an astronomical capacity. Astronomer/priests would stand on the western causeway in order to record the movements of the moon against the towers.

It is thought by some that the site of Angkor was chosen because is a good military position and there was potential for farming. Others believe that the geographical location and the way the temples are arranged was based on a sacred geology scheme from ancient times.

The temple of Pnom Bakheng is surrounded by 108 towers. the number 108 is sacred in both Hindu and Buddhist beliefs. It is the sum of 72 plus 36. The number 72 is a primary number in the sequence of numbers related to the earth's axis. It causes the alteration of the positions of the constellations over 25,920 years. It changes one degree every 72 years.
.
The Angkor complex is located 72 degrees longitude of the Pyramids of Giza.  The temples of Bakong, Prah Ko, and Prei Monli are south of the main complex. They are in the same alignment of the three stars of the Corona Borealis as they were during the spring equinox in 10,500 BC. Those stars were not visible from the temples when they were built.

Angkor Wat's main temple is the symbol of Mount Meru. Five inter-nested rectangular walls and moats represent chains of mountains and the cosmic ocean. The short dimensions of the compound are precisely aligned along a north/south axis. The east/west axis has deliberately been diverted 0.75 degrees south of east and north of west. That was to give a three day anticipation of the spring equinox.


The temple named Ta Prohm is the only temple at Angkor that has not been restored. It is overgrown by the forest. Walls, roofs, chambers, and courtyards have been repaired enough to stop further deterioration. Bushes and undergrowths have been cleared from the inside. But the trees took hold centuries ago and have grown into the bu8ildings. Trunks and roots are prying the stones apart.

The artwork at Angkor Wat is extensive. There are statues everywhere. Some are of the kings but most are religious. When it was still a Hindu temple each room had a sculpture representing Vishnu. Most of them were phallic in nature which is a characteristic connected to Vishnu.

Bas relief carvings throughout represent various kings, queens, battles, and religious figures. One section is lined with beautiful women. Each looks identical until you look closely. Then you can see that no two are alike.

One room known as the Hall of Echoes is known for its acoustics. If you cross the room and stand with you back to the wall in the left corner you can simply thump your chest and listen to the sounds.

You can follow the steps of the astronomer/priests of old. It is a good way to see the sun come up in the morning and to view the stars at night.

Angkor Wat has a fortune worth of art. And that is after so much looting over the centuries. It is worth seeing for many resons.

One word of caution. It is said that unaccompanied women have been attacked. It is recommended that women not go to Angkor Wat alone and that they should not stray from their group.

So now you have another spot to add to that long list of places you want to see.

Wonders Of The World