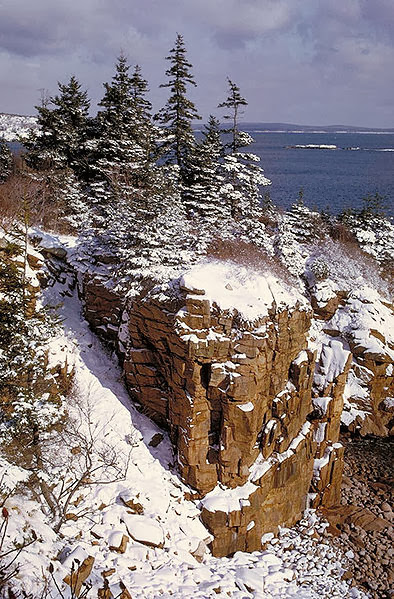 The oldest National Park east of the Mississippi River is Acadia National Park in Maine. This area was and is inhabited by the Wabanaki people. They are a Native American confederation of five nations: the Mi'kmaq, Maliseet, Passamaquoddy, Abenaki, and Penobscot.

Acadia National Park has many geological features. There are mountains, woodlands, lakes, and ocean shoreline.

Mount Desert Island takes up the biggest part of the park. Most of Isle au Haut, parts of Baker Island, and part of the Schoodic Peninsula on the mainland make up the rest.

Acadia National Park is more than 47,000 acres in size. The permanent boundary was established in 1986 by an act of Congress. However there are still privately owned pieces of land inside those boundaries that the park is trying to buy.

Cadillac Mountain is on the eastern side of Mount Desert Island. It was named after Antoine Laumet de La Mothe, sieur de Cadillac the famous explorer. Made of pink granite it is covered with green lichen. It is often called the first place in the United States to see the sun rise. Cadillac Mountain is the only mountain in Acadia National park that has a road leading all the way to the top.

More than 420 million years ago the area of and around Acadia National Park was a region of powerful volcanoes. Cadillac Mountain is actually the center of one of the ancient volcanoes. It is made of granite; quartz; feldspar, and hornblende. Most volcanoes are made of ash or lava.

When the glaciers that covered the area receded what was left was the smooth rocks that cover the mountains. Early explorers thought that it made the mountains look like a desert. There are 24 mountains in the park.

Somes Sound is an inlet that is called the only fjord on the East Coast. Officials of the park call it a fiard.

The coast of Maine was formed about 550 million years ago on the ancient continent of Avalonia. During the changes made by colliding continents, tectonic forces stretched and tore the Earth's crust . Magma rose from the mantle. Super eruptions of volcanoes happened in what we now call Maine leaving areas like Acadia National Park.

It is said that in Acadia National Park you can fish with one hand and pick berries with the other. The coast is constantly changing. Cobblestone beaches have rocks that have been rounded down by ocean waves over the centuries. There are larger rocks that undergo the same wear and will someday be pebbles.

Sand Beach is made up mostly of crushed seashells and sea urchin skeletons. The water is cold. It hardly ever gets above 55 degrees Fahrenheit.

Bass Harbor Lighthouse has stood above the coast since 1858. It lights the way to keep ships from crashing into the rocky shore. The light was lit in 1858 and has never been turned off.

Sea caves are formed only at sea level. There are sea caves here hundreds of feet above sea level giving evidence that the level was at one time much higher. The caves are filled with round cobblestones. Unfortunately many of the cobblestones have been taken as souvenirs.

Thunder Hole is a rock cavern. When waves come in air and water shoot out of it and make a booming sound like thunder.

The confederacy of nations with the Wabanaki people united Algonquin language speaking native Americans. They were key players in the Revolutionary War because of the Treaty of Watertown. Because of the treaty Wabanaki soldiers from Canada are still welcomed to join the military of the United Sates. They are still fighting along side American troops today.

Acadia National Park has lakes and ponds for quieter fishing than the ocean. Eagle lake is the deepest of the 22 lakes and ponds. There are waterfalls plunging from the mountains.

There is a wide variety of animal life in Acadia National Park. At least 40 mammal species are found. There are beavers, otters, and porcupines; moose, and whitetail deer; black bear, red foxes, coyotes, and raccoons. There are 7 species of bats. Off shore there are humpback whales, harbor seals, and porpoises.

There are 338 species of birds to be found at different times of the year. Herons, cormorants, terns, owls, bald eagles, and hawks can be seen depending on the time of year. The Precipice Trail is closed from mid-March to mid-August because of nesting Peregrine falcons.

Because of the cool climate you won't see too many reptiles. There are only 7 species. Common garter snakes, green snakes, red-bellied snakes, and snapping turtles are the most likely to be seen.

There are 11 amphibian species. They include several kinds of salamanders and frogs.

Over 6500 species of insect make Acadia National Park home. Remember to wear some kind of repellent.

There are more than 1100 plant species. Deciduous hardwood forests and conifer forests. They are made up of spruce, hemlock, maple, fir, and pines. There are blueberry thickets and a lot of different kinds of grasses and wildflowers.

Naturally all these things will make for great photo opportunities. Bird watching is a popular sport in the area. Spectacular views from the mountains are there for your camera. You can even take pictures of rocks that are part of the rubble from earthquakes that caused damage to the park.

Hiking trails, bike trails, carriage trails, and scenic driving are all present in Acadia National Park. Campsites are available. There is also lodging in nearby towns.