Wonders Of The World: Mount Roraima 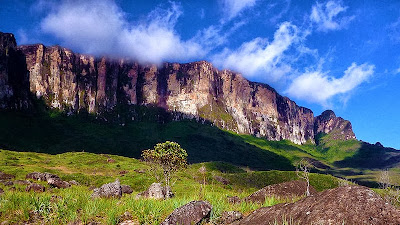 The border of Venezuela, Guyana, and Brazil is where you will find Mount Roraima. The mountain itself is located in Venezuela with the cliffs on its sides as the border of the other countries.

The trip to get near the mountain is not an easy one. With careful planning you can take gradually smaller flights to Ciudad Bolivar. Some very small planes even go from there to Santa Elana de Uairen. After that you can walk or drive to a village called Paraitepui.

In Paraitepui you can hire a guide and porters to help carry your gear. This is the recommended method for first time visitors and even professional climbers use guides because it is easy to get confused on top of Mount Roraima. The guides are of the Pemon tribe indigenous to this area.

Some of the guides can furnish tents and other items needed for a campsite. It is usually best to take your own. Also take your own food, enough for at least one more day than you plan on being there. That way you will have enough if you decide to stay an extra night on the top of the mountain.

It is about 16 or 17 hours to the top of the Mount Roraima if you include the 4 or 5 hour hike across Gran Sabana. You will probably spend the first night about halfway up the mountain there are locked cabins there where you can leave items that you have decided are not absolutely necessary and are only added weight. You can pick them up on the way down.

Some experienced climbers may want to try scaling the cliffs on their own. Permits are required and not easy to obtain. It would be a worthwhile climb.

Mount Roraima is part of the Guiana Shield, the highest point of the Guyana's Highland Range and a part of Canaima National Park. These are a series of table top mountains that date back to the Precambrian Age about 2 billion years ago.

The Pemon and Kapon natives of the region believe that Mount Roraima was once a mighty tree that held all the fruits and tuberous vegetables in the world. Makunaima was a trickster cut down the tree and created a terrible flood. Mount Roraima is the stump of that great tree. In the language of the Pemon roroi means blue-green and ma means great.

There is no easy way to climb to the top of Mount Roraima. There is what is considered the easiest way. There is a natural stone stairway path called La Rampa that goes all the way to the top. The first recorded climb was by Sir Everard im Thum in 1884.

The top of Mount Roraima is flat. It rains almost every day there and any soil that might have been there has washed away. Since the mountain is made of sandstones and quartzite, it is hard for vegetation to grow.

Because of the heavy rainfall there are some of the highest waterfalls in the world flowing from the top of the mountain. They are the source of many of the rivers of Guyana and the Amazon and Orinoco Rivers.

Once you are on top of the mountain you will see the soft pink quartzite covered with dark colored algae that lives on the surface. You will want to establish a camp under one of the rock formations known as Los Hoteles. Human wastes are to be deposited in holes that are dug and covered when finished. Any paper products are to be stored (including used toilet paper) and disposed of when you get back down.

There are trails leading from the "hotel" to various sights. You can go to the Valley of the Crystals. It is one of several spots where quartz crystals have eroded from the quartzite bedrock. There are bathing pools called jaccuzzis. The floors of these pools are covered with loose white quartz crystals. Don't let the term jacuzzis fool you. These little pools are full of very cold water.

As you follow the trails try to stay on the trails. The algae growing on the surface of the rocks is tender and you don't want to damage it. It is also very easy to get lost if you stray from the paths.

At the rim of the plateau there are deep fissures that form impressive chasms. They are very deep and are the result of erosion in the geologic fractures in the quartzite. Some believe that these fissures were caused by the breaking away of South America from Africa when Pangaea broke apart.

Near the pools on the surface of Mount Roraima there is more vegetation. There are ferns, mosses, and orchids. There are many carnivorous plants. they feed mostly on insects that seem to flourish here. Many of the plants are unique to the table top mountains.

Some of the animals you might find are hummingbirds, a very small black frog that is so primitive that it does not hop or swim, and a water cricket that is very large and gives a painful bite. Coatimundi and possibly mouse tracks have been seen but they are hard to find because they are nocturnal. They are fairly new to the plateau and may have come to eat food scraps left by human visitors.

Sir Arthur Conan Doyle is said to have based his book Lost World on Mount Roaima. In the book people discovered dinosaurs here. In real life there has been no evidence that dinosaurs were ever on top of Mount Roaima.

It is strictly forbidden to take any souvenirs of any kind from Mount Roraima. That means no plants, no animals, no traces of these at all. And certainly no rocks including the crystals that are there. And don't try to sneak a few thinking nobody will know. They have been known to search belongings and people when they reach the bottom.

Leaving Mount Roraima is easier than climbing up and so it takes a little less time. It is still a long walk and should be started early in the day.

Another way to see the top of Mount Roraima is by helicopter. There are charter services that will fly you around and above the mountain. They can't land so you would have to settle for looking and taking pictures. I have seen some of the pictures of clouds surrounding the plateau. Others show how straight up and down the cliffs that make the sides of the mountain are.

Another spot to add to that list of places you always wanted to see, isn't it?

Labels: Wonders Of The World