Wonders Of The World: Lake Natron 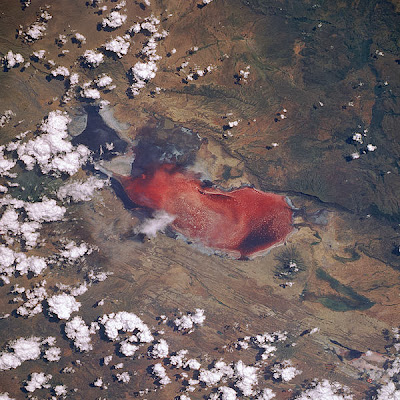 From high above the earth, satellites take pictures. One picture shows a bright red lake in northern Tanzania. It is Lake Natron.

Lake Natron is a salt lake. It is fed by the Southern Ewaso Ng'iro River and hot springs that are full of minerals. It is less than 10 feet deep and its width depends on the water level. Water varies because of the high rate of evaporation which leaves a mixture of salts and minerals called natron.

The surrounding land is dry with only seasonal rainfall. Temperatures in the lake can be as high as 140 degrees Fahrenheit but is usually around 80 degrees. Depending on the amount of rain the alkaline content can reach a pH of 9 to 10.5. That is almost as high as ammonia.

The reason the lake is red is because of cyanobacteria that live in the salty environment of the lake. A photosynthesizing pigment they use to produce food makes red color. Actually the colors are varying shades of red and orange.

No plants except for some algae grow in the salty water of the lake. The algae are not found anywhere else. But there are salt marshes and freshwater wetlands around the lake that have plant life.

There are a few animals that live there. Most are not found in other places. Of the three species of fish only one can be found in other parts of the world. There are also a few invertabrates that live in the slightly less salty water around the very edges of the lake.

Around 2 and a half million Lesser Flamingoes use Lake Natron as their regular breeding ground. They can feed on algae from some of the other water spots around the lake. The salt makes a caustic environment that helps keep predators away. The stronger the saline content is, the better it can support the flamingo nests.

No people live around Lake Natron but there is some herding and even a little farming in the area. Logging and a planned hydroelectric plant threaten to change the salt content of the lake and could upset the balances needed for the flamingoes to thrive.

The caustic alkaline water can burn the skin and eyes of any animals that haven't adapted to it. The sodium carbonate (salt) was one of the ingredients used by the Egyptians in their mummification process. Which leads to one of the most interesting things about Lake Natron.

Animals that die in the waters of the lake often are preserved by the salt. They are said to be calcified. They can be found on the shores of the lake and they look like grotesque statues.

This has led to legends about animals being too close to the water and suddenly being turned to stone. At least one photographer has taken the preserved animals he found lying on the shore to make some fantastic pictures.

He takes the animals and puts them in natural looking poses to make them look like they were frozen into stone. Some look like they are floating on the water, some are perched on branches, and some are just posed standing next to Lake Natron.

Some people believe that people can be caught in the water and be turned into statues. It won't happen unless you die in the water and are left for a long enough time for calcification to occur.

So if you decide you want to see Lake Natron, don't worry. It can be visited and viewed with very little danger to you.