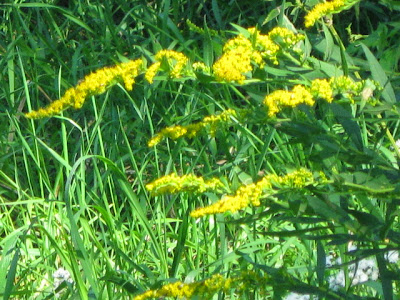 Driving along a country road you are bound to see seas of yellow from time to time. More often than not it is goldenrod. You will see it in late summer and into the fall.

Many people associate goldenrod with allergies. The truth is that goldenrod and ragweed appear at about the same time. Ragweed is what people are allergic to, not goldenrod.

There are about 150 known species of goldenrod. One of the reasons there are so many is that goldenrod can cross breed with other plants. A lot of the goldenrod species are hybrids.

Goldenrod is known by its yellow flowers that grow on woody stems although there is at least one species that has white blooms. They are members of the aster family. their size is anywhere from 1 1/2 inches tall to almost 40 inches. If the plant is bruised it smells a bit like wild carrots.

The pollen of goldenrod is heavy and sticky. It is not airborne which is why it is not considered to be an allergen. Pollination requires bees and other insects to spread the pollen from one plant to another. However some people have experienced rashes and a burning sensation after coming into direct contact with goldenrod.

These plants are home to many different insects. There are a few like the goldenrod spiders that need goldenrod to lay their eggs. If you examine a plant you can often see the gall or lump on the stem where insect larvae feed. Some wasps lay eggs in the larvae.

Honey made by bees using goldenrod nectar is bitter and smells bad until it ripens. Often it is darker than other honey because it is mixed with other nectars.

Goldenrod is found all over the world. It is used as a food source and in medicines. Many places consider goldenrod to be weeds but in Europe goldenrod is cultivated and used in gardens.

There is such a large quantity of rubber in goldenrod that Thomas Edison experimented with it. He cultivated and fertilized it with a special process to maximize the rubber content of the plants. Some his 12 foot tall plants yielded as much as 12 percent rubber. When Henry Ford gave Edison a Model T Ford automobile the tires on it were made using goldenrod rubber.

During World War II goldenrod rubber was experimented with further to try to produce a cheaper source of rubber. Unfortunately the molecular density is lower than regular rubber and it was not successful.

After the Boston Tea Party colonists had no tea. They used the leaves of goldenrod to make tea. They called it Liberty Tea. They also made dye from the flowers and leaves. The stems were used as divining rods to find water. It was considered good luck to have goldenrod growing close to your house.

Goldenrod has been used for medicinal purposes. This is where I feel I must ask you to consult with your doctor before using any type of medicine whether it is herbal or prescription. Sometimes there can be unpleasant and even dangerous interactions. Some combinations can either dilute or strengthen the effects of each one. Your doctor knows best.

Some of the medicines are administered by drinking tea made from flowers and stems. There are infusions and extracts and you can even buy goldenrod capsules at health food stores.

Goldenrod is most widely known for use as a diuretic and kidney tonic. It fights inflammation of the urinary tract and irritation caused by bacterial infections. It is used to prevent and treat kidney stones.

In 1788 it was recorded that a 10 year old boy had been taking an infusion of goldenrod for a few months. He passed a large amount of gravel, 15 large stones weighing up to 1 1/4 ounces, and atleast 50 stones the size of peas.

As a diuretic it helps flush the urinary system and gets rid of toxins from the body. It works well during a healing fast. Use goldenrod to help reduce swelling due to fluid retention. Just remember to keep yourself hydrated and your electrolytes balanced.

Flu and other stomach disorders can be treated with goldenrod tea. It eases vomiting. The astringent properties make it a good treatment for dysentery and intestinal ulcers. It also helps cure ulcers of the stomach.

For women goldenrod has been used as a douche to fight yeast infections. It eases cramps and helps regulate menstrual cycles.

I even read in one article that goldenrod can cure ulcers and sores in a man's or woman's "privy parts".

Respiratory ailments respond well to treatment using goldenrod. Cold symptoms, allergies, asthma, and hay fever are relieved. Goldenrod can loosen congestion in the chest and nasal passages. It has been used to treat diphtheria and even recurring tuberculosis symptoms.

It heals sores in the mouth and throat. For a sore throat gargle with goldenrod tea and it will sooth the inflammation and kill bacteria. It even eases laryngitis symptoms. Goldenrod makes a good mouthwash for the same reasons.

Native Americans chewed goldenrod leaves to reduce the pain of toothaches. It is also said that it can help loose teeth tighten in the gums.

Other medicinal uses for goldenrod are treatment of arthritis, gout, minor wounds, diabetes, liver enlargement, and internal bleeding and bruising. Also rheumatism muscle spasms, diabetes. It is used to relieve exhaustion and fatigue. In case you need to "sweat out" toxins from your body drink goldenrod tea and it will happen.

Lotion made from goldenrod flowers is used to treat insect bites and stings.

Goldenrod is good to eat too. The leaves can be cooked like any greens. You can add them to soups, stews, and casseroles. You can eat the blossoms. They are good in salads and add a bit of color.