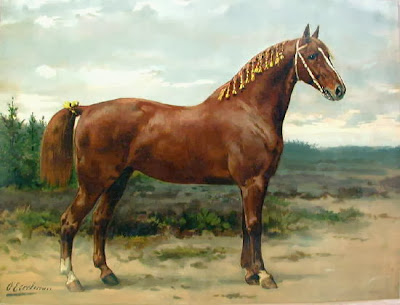 A dog has long been called man's best friend. Its true. Dogs formed a bond with humans. They are sensitive to our moods and needs and only ask for a pat on the head and a little food and water.

But if you are out on the range for any length of time you will depend on your horse. It is your ride, your extra strength, and your constant companion.

When most of us think of horses we think of the sleek animal that we can ride when the mood hits us. They are a great ride but they're so much more than that.

Over the last 45 to 55 million years horses have evolved from small multi-toed creatures to the bigger hooved animals of today. Humans started to domesticate horses about 4000 BC and by about 3000 BC horses were widely used.

At first horses were used as pack animals. Then they were pulling wagons with heavier loads than men could pull. Someone thought to have them pull wagons with people in them and then they tried riding them.

Oxen were used to do a lot of the heavy agricultural work. They were tough brawny animals. They were stronger than horses. But horses were faster and had enough strength for the work that needed to be done. The back of an ox is infinitely less comfortable than a horse's back for riding. Not to mention that horses are smarter and more agreeable.

"Cold-bloods" are broader and bigger. They are generally used as work horses. Examples are Percherons and Clydesdales.

There are a lot of horses that run wild. In the United States, there are the mustangs of the Southwest. Technically they are feral, not wild. They are descended from domesticated horses but now roam free. The only known living truly wild horses are the Przewalski's horse found only in Mongolia.

Baby horses are foals. Most are born at night. They are able to run only a few hours after birth. It's a good thing they drink milk from their mothers because their legs are so long that their heads can't reach the ground to graze for about 6 months.

As they age, male horses are called colts and females are fillies. After about five years the female is a mare and the male is a stallion. Castrated males are known as geldings.

Horses usually sleep standing up. That way they are ready to run away from predators. But they need some REM sleep every couple of days or they will drop. REM sleep means they have to lie down. But they don't do it often or for very long. They need very little sleep and can doze while standing. They feel more comfortable in groups because some horses sleep and others stay awake to stand guard.

You can get a good estimate of a horse's age by looking at it's teeth. At around the age of five they will have shed all their baby teeth and have all their adult teeth. Around 11 years their teeth will be worn flat.

At 10 Galvayne's groove starts at the gum line and goes up the side of the tooth. Then at 15 it should be only halfway from the top. In it's 20"s the groove will even disappear if the horse lives long enough. The horse's teeth will gradually wear down to nothing if they live long enough.

The older a horse is the more changes you'll see in the teeth. They will be yellower. An older horse's teeth are at an angle instead of up and down. The teeth also become more angular in shape instead of oval.

Horses are herbivorous. They eat only vegetation. They sometimes get into something that causes colic. Because they can't burp that can cause extreme discomfort and even death.

A few quick facts about horses:

They usually shy away from the smell of pigs.

Horse's hooves are made of material similar to our fingernails. They need to be groomed so they don't split or get infected.

Horses are measured in "hands". A hand is about 4 inches, the size of a man's hand from one side to the other.

The average life expectancy of a horse is 25 years. One horse named Old Billy lived to be 62 years old.

Horses have bigger eyes than any other land mammal. The eyes are on the side of their heads so they can see almost 360 degrees at a time. That's why you often see them with blinders blocking their side vision in parades and races. They won't become distracted by movements to their sides.

Ponies are actually small breeds of horses as opposed to being young horses. I call young ones ponies too so don't worry too much about it.

The 4 forward movements of a horse are called walk, trot, canter, and gallop. During a gallop all four legs are off the ground at the same time.

Horses use their eyes, ears, and nostrils to let you know what they are feeling. If a horse's nostrils flare and it's ears lie back against it's head get out of the way because it's going to attack.

In the wild a female usually lets the herd know when it is time to move to new feeding ground.

Often there is only one male in the herd and he will be the leader.

A horse turns it's ears to help it hear better.

Often you can hear a mare make a whickering noise while she is nursing her foal. Horses use different sounds to communicate and the sounds are fairly universal to all horses.

When drinking the horse uses a sucking motion instead of lapping like a dog.

Besides using their tails as a fly swatter, horses use them to communicate with other horses.

If you are going to own a horse remember that they require care. After a ride they have to be curried and combed to cool them off slowly. It's a good way for you to build a relationship with your horse. It keeps them shiny and healthy looking too.

They need their hooves trimmed every few weeks. You can learn how to file them. It's easy. If your horse is shoed the shoes will need to be adjusted as the hooves grow too. For that you should probably get a professional. Remember to check for pebbles and other foreign objects that might get between the shoes and the hoof.

A saddle can be very ornate if you want to put your own stamp on it. Most are now made of leather rather than the wooden originals. They are sometimes decorated with fancy stitching and metal and gem inserts.

In the United States we use a Western saddle. The other commonly used saddle is the English saddle. Basically they are the same. They provide a comfortable seat for the rider and help distribute the rider's weight to keep the horse more comfortable.

Stirrups hang on either side of the horse. Mounting always from the left, you place your left foot in the stirrup. Using the stirrup as a step you lift yourself and throw your right leg over the horse as you settle into the saddle. Your right leg goes into the right stirrup. Keep your heels down at all times. Only the ball of your foot should be in the stirrups.

The front of the saddle is the pommel or swells. It is raised from the seat. The cantle is the back of the saddle and also raised. On the Western saddle there is a saddle horn. The horn is a knob in front. It makes a handle to grasp when mounting the horse. It was originally made to hold the cowboy's rope tight while he was working with the cattle.

There is also a saddle known as a side saddle. Women of breeding used it to keep their skirts from riding up. It was considered indelicate for a women to allow anything to touch that general area of her body too. With the common practice of women wearing pants side saddles are out of fashion.

Now that you know all about horses I'm going to go out and throw a saddle over my trusty friend, call man's best friend, and we're going for a ride. Hiyo, Silver!