Wonders Of The World: The Wave 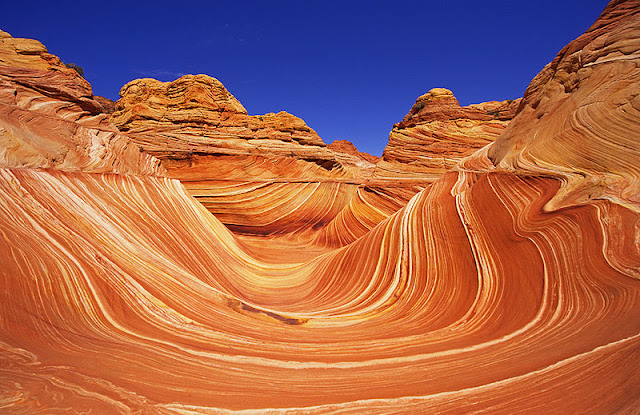 The Wave sure is a sight to see. Even pictures of it look like it's in motion. The Wave is a rock formation near the Utah- Arizona border. It is comprised of sandstone.

It was formed during the Jurassic Age. It is made of the Navajo Sandstone that is a major component of so many of the magnificent land features of the southwestern portion of the United States. Winds blew the sandstone everywhere. As the sandy stone fell it solidified into hardened formations. Then during the next sandstorm a new layer would be deposited. Each layer kept its own unique shape and color.

Then came the rains. They were infrequent but they caused erosion of the sandstone creating the troughs that we see today. They show off the layers of sandstone.

After they were formed the drainage basin that fed the rainwater to the troughs shrank so that there is insufficient runoff to cause much more erosion due to water. Now they are eroded almost exclusively by the wind. You can see that the steps and risers are oriented to the predominant direction of the wind as it is funneled into and through the troughs.

The soft sandstone of the ridges and ribbing is extremely fragile. Hikers must be careful to avoid breaking them off.

In some places deformed laminae is exposed. It is believed that it was caused by dinosaurs trampling around on newly deposited sandstone. Dinosaur tracks and desert-dwelling arthropod tracks have been found in the area.

Even today after a rainstorm tiny pools of water will collect. In them you might find tadpoles and fairy shrimp.

The Wave is one of the most popular places for landscape photographers for obvious reasons. The illusion of a wave is easily captured by a camera. Although the best time of day to get a good picture is said to be in the middle of the day, good pictures are there all day. You just have to deal with the shadows.

Some of the animal life you might find there are rattlesnakes, tarantulas,  scorpions, black widow spiders, and centipedes. I said might. They are hard to find.

Because of the beauty of The Wave it is a popular place for hikers. Only 20 people are allowed in per day. You must buy a ticket. It is only $5.00 but it is a way to control the number of people so that the damage to The Wave is kept to a minimum. It is also a way to protect the safety of the hikers.

Ten of the tickets can be bought online. Ten can be bought the day of your hike. Reserve your tickets online months in advance if you can. The waiting lines for daily tickets can be very long so try to set aside a few days that you will be able to go because you might not get a ticket. In case of bad weather all hikes might be cancelled. Tickets will not be good later.

There are no overnight stays. All around The Wave are rock formations and wildlife preserves and areas that allow camping.

Also if you get to go into The Wave there are no toilets. None at all. You will need to carry bags to collect your body waste materials.

This is a dangerous place to be. Each year there are lost hikers, some of them resulting in deaths. The temperatures get very hot during the day. Make sure you get back before it turns dark and carry a GPS just in case.

Take plenty of water with you when you go. It's a good idea to overdrink water for a few days before to help you from being dehydrated. Take along a few nutritious snacks that will keep up your energy too.

Sunscreen is a must. No matter how tan you are the sun beating down on The Wave and reflecting back up can cause terrible burns.

There are guided tours that you can take. Call ahead to see what is available and how much it will cost.

You might want to look into spending some time at some of the many other sights in the immediate area too.


Labels: Wonders Of The World