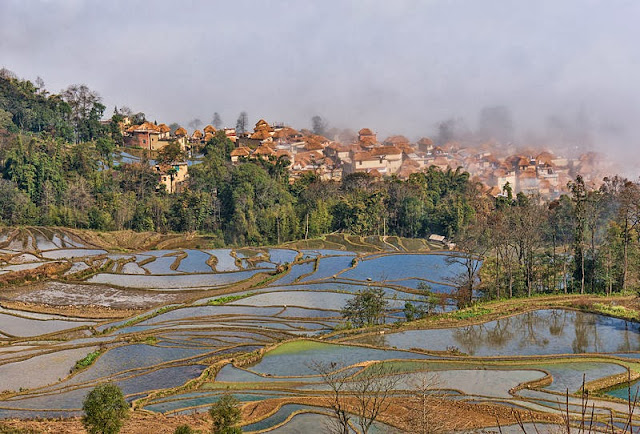 In Southern Yannan of China near the border with Viet Nam spectacular terraces cover the Ailao Mountains cascading down to the Hong River. The Hani people have spent 1300 years developing a complex irrigation system and series of terraced rice paddies that are the major crop of the area.

There are 82 villages in the area. The people who live there have a religious belief in natural things like the sun, moon, forests, mountains, fire, and rivers. Most people live in traditional "mushroom" houses with thatched roofs. They live in harmony with their environment.

When the Hani moved to this region it was a rough, forested place. The climate is a sub-tropical with extremely high rainfall. It was going to take some work to develop the mountain into a workable agricultural area.

The forested area at the top of the mountain is used to help trap rainwater. It seeps into the mountain which is made of granite with sandstone beneath it. The water from the sandstone comes back to the surface often in a series of springs. Also clefts in the granite of the mountain channel water to the terraces and rivers below. In addition the Hani built canals to further distribute water.

The Hani built a series of terraces that capture the water in order to grow rice. They rise by 3000 steps at varying angles. The terraces make a landscape that is rare all over the world.

The Hani also use this area to raise buffalos, fish, eel, cattle, pigs, and ducks, as well as the red rice they are famous for.

Each family in the villages that surround the terraces works one or two plots in the terraces. They use the wastes from their animals to fertilize the rice. It is an ecologically sound practice and uses all natural means to produce the crops. 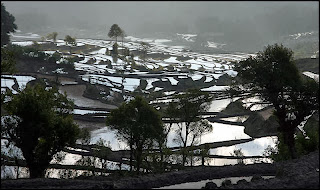 In 2013 The Honghe Hani Rice Terraces was listed as a World Heritage Site. Besides the organically grown red rice and the way the people live in a natural environment, the terraces are really beautiful.  During the non-growing season they are kept full of water. The different seasons and different colors from the sun make the terraces display different colors.

The Hani people are artistic people. The Emperor of the Ming Dynasty titled them "Skillful Sculptor".  They put their skills to work when they created the terraces. The lowest section looks like a galloping horse.

If you decide to see the Hoghe Hani Rice Terraces for yourself there is bus service in and out of the area. T-shirts and shorts can be worn all year but you might be wise to take a jacket, just in case. And don't forget your sunscreen. The sun is very strong there.


If you are lucky you might be there during a local fair. Colorful ethnic costumes are worn. You can sample local foods and maybe pick up a souvenir or two.