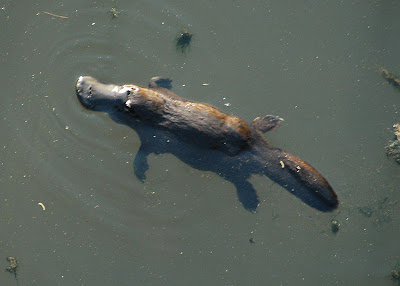 The platypus is one of the most unusual animals you could ever see. It looks like no other animals. It is just strange in every way.

The platypus is a mammal. Actually it is a monotreme. Monotremes are mammals that lay eggs instead of giving birth to live young. The only other living monotremes are some of the ant-eaters.

Mating happens once a year between June and October depending on the region they live in. Some DNA testing suggests that the males could be traveling to other groups to mate with other females as well as within their own group. This means that they might mate with more than one female.

Normally the platypus lives in a simple burrow in the ground. The female builds a more complex burrow after she mates. It is deeper and has plugs at various intervals to protect the eggs from water and predators. It seems to regulate the temperature and humidity too. The male doesn't take care of the young so he stays in his simple burrow.

In the burrow the female softens the ground with dead wet leaves folded over each other. At the end of the tunnel she makes a nest of reeds and fallen leaves. She carries these materials by tucking them beneath her curled tail and dragging them behind her.

The genes of the platypus show a possible evolutionary link to birds because they both have the DMRT1 gene. The eggs laid by the platypus are leathery like the eggs laid by reptiles.There are usually 1 to 3 eggs. After she lays her eggs the female curls around them.

When they hatch the baby platypuses are blind and hairless. Like all mammals they are fed milk from the mother. Unlike other mammals the platypus has no teats. Her milk is released through her pores and puddles in grooves on her abdomen. The young lap up the milk from there.

The grown male platypus is about 20 inches long. The female is about 17 inches.

The body and tail of the platypus looks similar to a beaver. The tail is broad and flat. They are both covered with thick brown fur. It is waterproof and traps a layer of air to keep the platypus warm. The tail is used for storage of extra fat much like fat-tailed sheep.

The platypus has a large rubbery snout that looks like a duck's bill. The snout is a sensory organ with nostrils on the top. The mouth is beneath the bill, not part of it. The eyes and ears are in a groove just back from the bill. The groove closes when the platypus is in the water.

The bones of the middle ear are fully incorporated in the skull like all mammals but the external opening of the ear is at the base of the jaw like you would see in primitive mammals. An interclavicle is just one of the extra bones found in the shoulder girdle. Other mammals don't have these.

It has webbed feet with the slightly thicker webbing on the front feet able to fold back when it walks on land. It walks on the knuckles of the front feet to protect the webbing. The platypus walks like a reptile. It holds its legs at the side of its body instead of underneath it.

Both males and females are born with ankle spurs. The spurs fall off the female very early in her life. The spurs on the male are used to dispense venom. The venom contains at least 80 different toxins. They are made up of mostly defensin type proteins that are unique to the platypus. It is powerful enough to kill small animals but not humans.

However the venom causes excruciating pain to humans that could incapacitate them for a while. The wound site quickly develops edema, or swelling due to gathering of fluids. It will gradually spread. The pain will develop into a long lasting heightened sensitivity to pain that can last for days and even months. Pain managing medicines like ibuprofen and morphine seem to have no effect in lessening the pain.

When reports of the platypus were sent to England from explorers in Australia it was thought they were a joke. Finally someone sent a stuffed platypus. The pelts had been used for quite a while as fur to make coats.

The scientists thought someone was playing a trick on them by sewing together parts of different animals They even went so far as to cut the animals apart looking for the stitching used.

The platypus is found in freshwater rivers and lakes in Australia and New Zealand. They are good swimmers. They like bushland, tropical, sub-tropical, and temperate rainforests.

Even though we no longer use the platypus pelts for clothing, man is still a big threat to the platypus because of pollution and clearing the land to make way for civilization. Their main enemies are snakes, goannas, rats, and foxes.

Platypuses are completely carnivorous. It uses electroreceptors to locate worms, shrimp, and small fish in the water. Once it captures them it stores them in its cheeks until it surfaces. Then it eats.

The platypus makes a variety of sounds. The most familiar is a growling noise that has been compared to the sound of a puppy.

There are remains of platypuses from 110 million years ago. They actually were around with the dinosaurs. They have evolved a bit over the years. The remains of the modern day platypus have been dated at 100 thousand years ago.

The number of platypuses has remained fairly constant. Therefore they are considered to be of "least concern" on the endangered species list. It is amazing that such a strange and primitive animal is surviving so well in today's world.