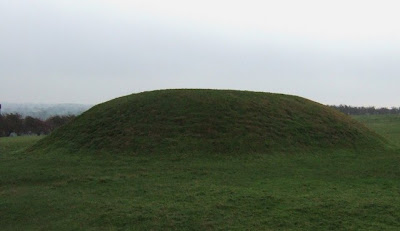 The Fir Bolg, pronounced Feer Bolg, were an ancient race that ruled Ireland. They arrived in Ireland in the Year of the World 1738. That is also known as 2276 B.C.

For three centuries the Fir Bolg had been enslaved by the Greeks. Five brothers organized an escape. They stole Greek ships and the tribe of about 5000 set sail for Ireland.

The five brothers' names were Slainge, Rudraige, Genann, Gann, and Sengann. As they were nearing Ireland a fierce wind caused rough seas. The ships were separated into three groups. These were known as the Fir Bolg, the Fir Domnann, and the Fir Galleon.

The groups finally landed on Ireland at the same time. They sent messengers to each other that they would meet at Tara in the center of Ireland.

At Tara they agreed to divide Ireland into five equal provinces. The provinces were named Mide, Ulster, Leinster, Munster, and Connaught. Each brother was the king of his province. And the three groups re-united as the Fir Bolg.

In modern times Mide and Ulster have combined to become Mid Ulster. With the other three provinces they are the four provinces of Ireland.

For 37 years the Fir Bolg ruled Ireland and Ireland thrived. There were seven Fir Bolg kings during that time. They introduced a political structure that had not been present before.

They also brought bronze-age technology with them from Greece using copper and tin to made items of bronze. The number of the Fir Bolg was relatively small but the Neolithic farmers already in Ireland learned quickly to work with the metals. There was a successful farming community to feed miners and craftsmen as well as the farmers.

International trade expanded under the Fir Bolg. The metal of Ireland was in demand by artisans and craftspeople overseas. Irish and Irish-style metal products were in high demand because of the high quality of the metal and workmanship. Lunalas, gold sundiscs; bronze knives, daggers, and axes; and copper halberds have been found throughout Scandanavia, Crete. and Iberia.

The population was growing rapidly. Land was being used for mining. More farmland was needed. Woodlands were cut down to provide more farm area.

During all this time the Fomorians raided constantly. An army was needed to fend them off. At the same time the Fir Bolg would sometimes unite with the Fomorians to fight against invaders from other lands.

Then came the Tuatha de Danaan.

The High-king of Ireland had a dream. It disturbed him so he summoned his wizard. In the dream he saw a flock of black birds coming out of the ocean. There were many birds and they swarmed over the people of Ireland and fought them. The birds were winning the battle but one of the Fir Bolg cut off the wing of the noblest of the birds.

The wizard interpreted the dream. He said that many warriors were coming from the sea. They would invade Ireland. The invaders would inflict death in many forms because they were also skillful magicians as well as warriors. Evil spirits would deceive the Fir Bolg. The invaders would be victorious.

The Tuatha de Danaan landed and camped in Ulster. They were happy there because their ancestors had come from there.

When the Fir Bolg learned of this they spied on the camp. They saw the handsomest men who were fiercely armed. They were skilled in music and games. They were the most gifted men who had ever come to Ireland.

The Fir Bolg were afraid. They needed to find out if there were any weaknesses to these people. Their most terrifying warrior was chosen to go to the Tuatha de Danaan to see what their plans were.

Sreng was the warrior. He took his shield and all his weapons. The Tuatha de Danaan sent Bres, their most powerful warrior to meet Sreng. For a long time the two just sat, sizing each other up. Each was impressed by the size and weapons of the other. When they finally spoke they were surprised to find that they spoke the same language.

Both People were descended from the same ancestor. The warriors agreed that if there was a war between them it would be bloody and cruel. Both returned to their camps and recommended that peace be declared.

The Tuatha de Danaan petitioned the Fir Bolg for a portion of Ireland for them to settle. The Fir Bolg denied the request and war was declared.

Instead of pursuing they went happily back to their own camp. They celebrated their victory. Each warrior presented the king with a stone and the head of one of the slain enemy. They build a cairn (stone mound) with them.

For three more days there was bloody fighting. Many lives were lost on both sides but the Tuatha de Danaan had more numbers.

On the last day of battle the furies, hags, and monsters of doom came forth. Their cries could be heard everywhere.

In furious combat many fell both dead and wounded on each side. Nobles as well as warriors fell. Sreng, the warrior of the Fir Bolg, fought fiercely. He swung his sword at the king of the Tuatha de Danaan and cut off his arm.

Peace was agreed. Sreng chose the province of Connacht and that is where the Fir Bolg went to live. The Tuatha de Danaan took posession of the rest of Ireland and Bres was made king.

No one knows what became of the Fir Bolg after that time.