Beware Of The Rattlesnake 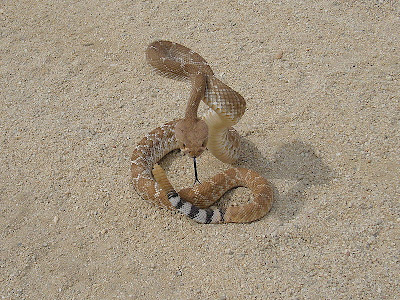 You're out hiking and suddenly you hear a whirring, buzzing, rattle sound. Even if you have never heard it before you immediately know you are hearing a rattlesnake.

The best way to protect yourself from harm is to be informed. If you know about rattlesnakes you will be less likely to get a bite. And if you do get a bite you'll know how to treat it.

Rattlesnakes are pit vipers. They are related to copperheads and pit adders. They are called pit vipers because of the loreal pits which are heat-sensing organs on the face. All vipers are poisonous. Their heads are sort of triangular shaped and they have distinct necks.

Although they don't see very well with their eyes, the eyes also sense heat radiation. The eyes and the pits help locate the direction of their prey so they can strike and inject their venom.The eyes work at night but the rattlesnake actually sees better during the day and they have some form of color vision.

Rattlesnakes have a keen sense of smell. They can smell through their nostrils and by flicking their tongue. The tongue carries particles that carry the smell to the Jacobson's organ located in the roof of their mouth.

Snakes don't have any openings for their ears and the inner ear structure is not highly specialized, But they feel vibrations in the ground. These are relayed through the skeleton to the auditory nerve. So in a way they can hear.

Fangs. Those are the scariest part of the rattlesnake. We imagine them in the open mouth of a striking snake. The fangs are hollowed so that the venom can pass from the poison glands at the rear of the head near the outer edge of the upper jaw. The fangs are long and sharp. When the snake bites muscles on the sides of the venom glands contract and squeeze venom through ducts into the fangs.

When the fangs are not biting they fold back and settle into place in the roof of the snake's mouth. The fangs of a newly born rattlesnake are fully functional because they are born live and can kill prey. The venom is not quite as strong as it will be but it does the job. At least 3 sets of replacement fangs are behind the functional fangs. Every 6 to 10 weeks and adult will shed their fangs and allow a new pair to come in.

The venom of most rattlesnakes causes cell death and disrupts the ability of blood to clot. Some also can cause paralysis. These are meant to immobilize and disable their prey. It will break down tissue to get it ready for eating.

The strength of the venom varies. Different species have different strengths. It gets stronger as the snake gets older. Sometimes if a snake has discharged a lot of venom recently it will seems less potent because the supply has not had time to rebuild.

Rattlesnakes are called that because of the rattles on their tails. When the snake vibrates its tail the rattles make that noise to warn whatever it is afraid of to back off.

Rattlesnakes are born with one pre-button at the end of the tail. It takes more than one to rub together to make the rattling noise. The buttons are made of the same material that makes skin, scales, hair, hooves and nails, depending on what kind of animal it is. Every time a snake sheds its skin it adds a new button to the tail.

There are specialized muscles in the rattlesnakes tail that give it the ability to shake the rattle for up to 50 times each second for as much as 3 hours at a time.

Sometimes some or all of the buttons will be lost to accident or because of a battle with a predator. Then they have to rebuild the rattler. Until that time no warning is given before a strike. They shed their skins several times a year so it doesn't take too long. These are reasons why you can't tell the age of a rattlesnake by counting its rattles.

Now in South Dakota they are reporting rattlesnakes that don't rattle. The tail of these snakes is curled like a pigs tail and not strong enough to shake the rattles. They have not determined whether it is a genetic mutation or some sort of anomoly of evolution. But they are finding more of them each year.

To make yourself safer from rattlesnakes here are a few tips for you. When out walking or hiking wear boots not shoes. Loose legs on your pants can fool the fangs a little too. Don't stray from the path. If you are walking through grass make a lot of noise and move a little slower. That gives the snake time to get away. Don't step over logs or rocks. Step on them. Sometimes a snake is on the other side. And don't overturn the logs and rocks. Snakes like to hide under them.

Be careful when reaching over rocks if you are climbing. Snakes like to sun themselves. And they can sometimes be found in trees, believe it or not. If you hear the rattle stop. Don't move. Give the rattler time to slither away. It's as afraid as you are. Most of all remember that not all of them will rattle first. If you surprise it or step on it, it will bite. A rattlesnake can strike using about 2/3 of its length. Make sure to stay far away from it if you want to observe. Ten feet should be a safe distance.

Rattlesnakes can regulate how much venom they inject. They can even choose not to inject any. But there are a few things you need to know if you do get bitten by a snake, any snake.

Try to get a good look at the snake to describe it but don't chase it because it can bite you again and again. Remain calm and slowly get away from the snake. Move slowly to keep your heart rate and circulation as low as possible. Remove any restrictive clothes and jewelry.

Make a splint or use something to keep the spot where you were bitten immobilized and below heart level. DO NOT USE A TOURNIQUET. DO NOT MAKE AN INCISION OR ATTEMPT TO APPLY SUCTION. If you are more than an hour from a medical facility you can place a lightly constrictive band that will allow one finger beneath it. Place it above the bite to prevent the venom from spreading.

Again remain calm. Keep warm. If you are not the victim, reassure them because it helps them to relax. Get to the nearest medical facility as soon as possible.

When you get to the medical facility they will try to determine if it is a poisonous snake bite. If it is they will administer antivenin. It is not antivenom.

The way they make the antivenin is to milk the venom from a live rattlesnake. The venom is diluted and injected into animals whose systems are strong enough to produce antibodies. They protect against the toxins in the venom. The antibodies fill the animal's blood aand some blood is taken from the animal. It is placed in a centrifuge to separate the red blood cells. The serum is purified into a powder that is packaged and distributed for use in snake bite victims.

Sometimes people will have an allergic response to the antivenin. It is known as serum sickness and usually passes quickly. The reason it happens is that it is made from animal antibodies that have a little difficulty with your own immune system.

Now you can safely go hiking or camping and be safe with the knowledge you have of rattlesnakes. Remember to watch your pets for signs of snake bite too. They might need medical attention too.