Merfolk; Are they Real? 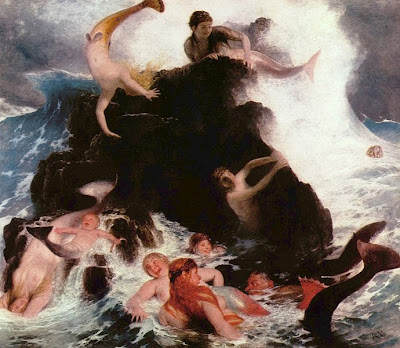 On the pier in Copenhagen, Denmark, is a statue of a mermaid. It's there to honor the story of The Little Mermaid by Hans Christian Anderson. The story was also made into a ballet which beguiled a local businessman who commissioned the sculpture. That statue was unveiled August 23, 1912. The 100th anniversary is being celebrated this year.

There have been other stories throughout literature that mention mermaids. In the Odyssey Ulysses was warned about the mermaids called sirens. They would lure sailors and their ships to their deaths on the rocks by singing their siren call. Ulysses had himself tied to the mast and ordered all the other sailors to plug their ears so the song would not entice them. He wanted to hear the song for himself.

Movies have also been made about mermaids. In Pirates of the Caribbean On Stranger Shores mermaids seduce sailors. One mermaid is captured to use her tear to use when drinking the waters of the fountain of youth. In Disney's Little Mermaid Ariel is the star of the cartoon. Mermaids of Mermaid Bay in Never-Never Land are allies of Peter Pan.

More recently Animal Planet showed 2 documentaries to scientifically prove the existence of mermaids. However at the end of the programs a small disclaimer is shown for each one stating that all the characters were actors and not scientists.

Merfolk are males and females of all ages. The first stories were about mermen who caused trouble for sailors. As time went on mermaids are mentioned almost exclusively, probably for the seductive powers they possess.

Merfolk can be extremely beautiful and appealing or extremely grotesque and threatening depending on who is telling the story. They are creatures who live in the water. They have human torsos and the tail of a fish for the lower body. They are often seen sitting on rocks in the middle of the ocean while they comb their hair and sing songs to entice unsuspecting sailors to their doom.

The earliest known stories of mermaids are from 1000 BC. It was believed that the Syrian goddess Atargatis would dive into a lake to take the form of a fish. Because of her great beauty the other gods would not allow her to give up her beauty so only her lower half would become a fish.

Since that time there are stories of merfolk in almost every culture. I'll give you just a few examples. It might seem like a lot but believe me there are a lot more. Mer refers to the water so merfolk are people of the water. In Old English they were called merewif. They are called rusalkas in Russia and eastern Europe, Mami Wata in west, central, and southern Africa and the Caribbean, jengu in Cammeroon, and liengu among the Bakweri. Native Americans have many tales of merfolk. Each tribe has a different story and a different name like lampeqinuwok of the Maliseet and Passamaquoddy.

There are the ben-varry from the Isle of Man, dinny-mara of Manx, havfrue and havmand of Scandinavia, merrow of Ireland, melusine are twin-tailed mermaids, merrymaids are Cornish mermaids, and ningyo from Japan.

There have been mermaid sightings throughout history. Christopher Columbus was sailing off the coast of Hispaniola and reported seeing "three female forms... which rose high out of the sea but were not as beautiful as they are represented".

Edward Teach, also known as Blackbeard the pirate, recorded that he always instructed his crew to steer clear of the enchanted waters where he and members of his crew had seen merfolk.

In the late 1800's there were 2 sightings of mermaids near Vancouver and Victoria in Canada.

Japanes soldiers saw several mermaids on the shores of the Kei Islands during World War II. When they reported to their commanding officer he told to come back when they had proof. One was found dead on the shore and he examined it. He returned to Japan and tried to convince scientists there to investigate but they didn't believe him.

In 2009 mermaids were spotted by dozens of people off the coast of Israel. It was leaping out of the water and doing tricks in the air.

In 2012 workers refused to continue working on 2 reservoirs in Zimbabwe because mermaids had harassed them into leaving.

Women cutting seaweed in the outer Hebrides reported meeting a female creature playing offshore. A few days later she was found dead a few miles from where they had seen her. She had the torso of a female the size of a well-fed child and the lower part of the body was like a salmon without scales. This happened around 1830.

In his log for June 15, 1625, Henry Hudson and his crew saw an unusual sight, " From the Navill upward, her backe and breasts were like a woman... her skin was very white, and long hair hanging down behind, of colour blacke; in her going downe they saw her tayle, which was like the tayle of a Porposse, and speckled like a Macrell..."

In 1809 William Munroe reported that prior to himself actually seeing a mermaid he had heard tales of them that he did not believe. When he saw one sitting on a high rock while he was walking on the sandy beach below. She was combing her hair and appeared to be naked. After a few minutes she dropped into the water and swam away.

In the 17th century travelers regularly told of encountering mermaids off the coast of Britain.

North of Cruden Bay an old fisherman reported that he had not just seen a mermaid but had a conversation with her.

The Aberdeen Chronicle reported in 1814 that 2 fishermen had been in a calm sea about a quarter of a mile from shore when they saw a creature that looked like a man sitting with his body half bent. They went to him. When they got to about 2 yards from him he heard the noise of the boat and turned to face them. He dived into the water and swam away and was joined by a female with the same anatomy as his.

A farmer from Cambeltown swore he had met a mermaid in 1811. His parish minister and the acting sherrif wrote in a report that they were satisfied that he believed he had seen such a creature.

In 1812 a man said he had seen a mermaid and heard her sing. He said her songs were similar to the sound of an Aeolin harp.

Fishermen said their fishing line had tangled with a mermaid off the Isle of Yell in 1833. They kept her on board the ship for about 3 hours. She was 3 feet long and had bristly hair down to her shoulders that she could erect and depress at will.

Another mermaid was caught up in the nets near the Isle of Man. The sailors said she was beautiful. They took her ashore with them. She wouldn't eat or drink and her color was turning bad. After 3 days they threw her overboard.

In 1947 at the Isle of Muck an old fisherman saw a mermaid sitting on a herringbox combing her hair. When she saw him watching her she dove into the water and swam away.

Many officials say that mermaids aren't real. People who report seeing them are only seeing manatees or seals. Because they are often sighted with dolphins they are thought to be dolphins. Other sea animals are said to be confused with being mermaids. And the cry of mermaids is thought to be the calls of sea gulls.

As with all legendary and mythological animals there have been hoaxes presented as the real thing. These are called Jenny Hanivers. PT Barnum owned a Jenny Haniver of a mermaid and displayed it for years. It was a monkey's torso sewn together with a fish tail.

Of all the mermaid stories I have read my favorite is as follows: Many years ago a prince from the Mazowsze Region went hunting with his men. While in the forest he saw a wild beast. He was close enough to kill it with an arrow but as he aimed, it suddenly disappeared. Of course the prince was shocked but on he went. When he stopped at a river to get a drink of water he bent over and saw a mermaid.

The mermaid told the prince to follow an arrow that she shot from her bow. He followed and reached a clearing. In the clearing was a run-down fisherman's cottage under a large oak. He went up to the cottage to ask for something to eat. Inside he saw a young woman sitting by the fire feeding her twin babies, a boy and a girl.

She graciously shared her meal with him. After eating the two sat on the front porch looking out at the river. The prince insisted that she name the boy Wars and the girl Sawa. She should clear the land around the cottage and plant crops. He gave the land to the young woman as it was part of his holdings. He knew he could trust her to work hard and increase the value of the land. Then a village would grow around it.

While the young woman listened to all the prince had to say she saw the mermaid rise in the waves on the river. The mermaid told her the village would become a beautiful city because of the hard work of the young woman and her simple fisherman husband.

That city is now called Warsaw in Poland.