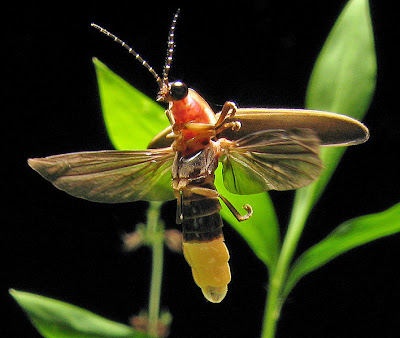 I'm sitting out here on my porch. My dog is lying beside me and I can see my horse in the corral. It's a peaceful evening; a good time of day.

But what's that I see? Strange little flashes of light all around me. The lightning bugs are out.

When I was a little guy I used to catch the lightning bugs and keep them in a jar to use as a light when I would sleep out in the yard. I'm ashamed to admit that I used them for other things too. Like taking the shiny light and pulling it off to make a ring on the finger of some pretty little girl. Her finger would shine so pretty and she would smile at me. I felt pretty special.

Lightning bugs are also called fireflies or lightning beetles. I guess they are called these names because they blink with the lights on their tails and remind folks of lightning bolts only small.

Lightning bugs aren't bugs. And even though they are called fireflies they aren't flies. They are beetles. They are a little softer shelled than most beetles though.

There are more than 2000 species of these little critters. They are found all around the world. Still their populations are getting smaller because of pollution and bigger areas of light at night.

Lightning bugs are nocturnal animals. That way their lights can be seen. They live in moist warm climates. If you live in a drier area and still have lightning bugs it's because they live in wet grasses and swampy parts around you.

Their lights are really interesting. They take in oxygen and mix it with a substance called luciferin. That mixture produces a light with almost no heat. So the little lights won't burn.

The sequence of flashes of light are unique to each species. Scientists aren't sure how the bugs control the light patterns. But each pattern is a signal that helps identify and attract mates.

Predators see the flashing patterns and steer clear of the lightning bugs. When in danger the fireflies give off foul tasting compounds called lucibufagins. These are steroids that make the predator vomit. It makes the flashy bugs less likely to be chased a second time. So predators avoid all glowing insects.

As I said before the flash sequences are used to attract mates. The males fly in the night showing off their tails. Females see the flashes and flash back. Some females stay in the grass and flash until the male comes down for some romance. In many species the females don't even have wings.

This method works very well... unless a female from another species answers the mating flashes and the unsuspecting male answers her. When he comes down expecting a loving embrace he is attacked, killed, and eaten. The lucibufagins transfer to her body and makes her eggs and the larvae stronger.

Female lightning bugs deposit their eggs in the ground. As they grow to maturity the larvae inject worms and slugs with a fluid that numbs them. Then the larvae eat them.

Adults usually eat nectar or pollen but some do resort to cannibalism. And there are some who don't feed at all.

The chemicals that make a lightning bug light up are used in medical research. The chemicals light up in the presence of ATP. Every animal cell has ATP in it. Diseased cells have abnormal amount of ATP. When the chemicals from lightning bugs are injected into the cells scientists can watch the changes to study diseases ranging from cancer to muscular dystrophy.

The use I like best is the electronic detectors made with lightning bug chemicals that are fitted onto spacecraft. They are used to detect life in outer space. They can also detect food and bacterial contamination on earth.

So here I sit on my porch. I like watching the lightning bugs flitting about in the night. It's been a peaceful evening.