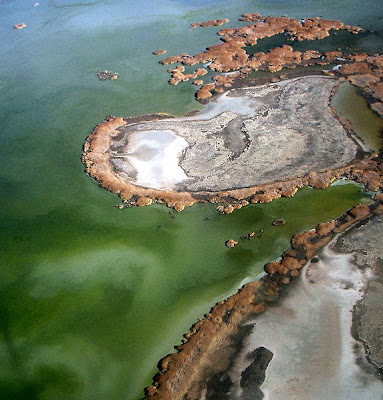 About 32,000 years ago Lake Bonneville was formed in an area that became the southwestern portion of the United States thousands of years later. Lake Bonneville was a prehistoric pluvial lake meaning that it was landlocked. There was no connection to outside water sources. It received new water in the form of precipitation.

Then about 14500 years ago came what is known as the Bonneville Flood. A large part of Lake Bonneville was released through Red Rock Pass in Idaho leaving only smaller lakes in Utah. The largest of these is the Great Salt Lake.

It has been a while since we went on an adventure and I don't mind telling you that I have been getting kind of "antsy". I thought the Great Salt Lake would be a good place to go because it's not to far from home for me. So get yourself a nice tall glass of lemonade and something crunchy to chew on and we'll go exploring the Great Salt Lake.

The Great Salt Lake has no water outlets. No water leaves except by evaporation. That leaves an extremely high mineral content in the lake since the minerals don't evaporate. The salt content is higher than that of the oceans.

The water level of the Great Salt Lake varies. It is shallow for such a large lake and when evaporation is greater than the amount of water coming in the lake can become much smaller. Then in times of heavier precipitation it can be large enough to cause problems.

There are 8 to 11 islands in the Great Salt Lake depending on which source you consult. The reason they can't agree is that the fluctuation of water levels make some of the islands either disappear in high water levels or show them to be connected to other land masses in lower levels.

Because the temperature of the Great Salt Lake stays warm for much of the year lake effect snowfall in the fall, early winter, and again in the spring are common. In the summer the same lake effect can cause serious storms many with thunder and lightning.

The Great Salt Lake has been called America's Dead Sea. The salt content of the Dead Sea is almost 34%. The ocean is about 3.5% and the Great Salt Lake ranges from 5% to 27%. You might wonder why the range is so big. Some areas of the lake are higher in salt than others and the salt levels also depend on how much water is in the lake at the time.

You may have heard that you can't drown in the Great Salt Lake. That isn't true at all. You can drown in any water. You may have also heard that you can automatically float in the Great Salt Lake. Also not necessarily true. But it easier to float for a lot of people because the water makes you more buoyant. Just make sure you rinse off in one of the many fresh water showers after. The salt will fade your clothes and can cause irritations to your skin.

With all that salt you'd think that there would be very little wildlife but actually there is a big population of animals. There are a few species of fish. Brine shrimp and brine flies as well as several algae species. Brine shrimp are a major industry in the area. They are used as bait for fishermen all over the world. The eggs are harvested and many are sold in little packages to kids of all ages. Follow the direction on the package and you will have a fine population of sea monkeys.

The wetlands in the region of the Great Salt Lake are a critical habitat for millions of migratory birds. Most are waterfowl and shorebirds. There are 27 private duck clubs, 7 state waterfowl management areas, and a federal bird refuge.

Several of the islands have critical nesting areas. Three of them are limited access because they are protecting nesting colonies of the American White Pelican.

The islands are also home to lizards and mammals.A wide variety of plant life can be found there too.

So we know a little bit about the place but what is there for us to do? I mentioned swimming before. There are beaches all over the place. All water sports are available. Boating is very popular. Sailing is one of the favorites on the Great Salt Lake. You just have to watch for the bad weather that springs up sometimes with very little warning. It can be treacherous. Water skis and jet skis are abundant.

There are all kinds of parks and natural areas to explore. The islands have trails too. Hiking, biking, and horseback are good ways to see what you want to see. There are campgrounds for those who like to sleep under the stars.

In the evening you will see some spectacular sunsets. There is something about the lake that seems to make sunset "more" than you can see in other places.

The only drawback to visiting the Great Salt Lake is the "lake stink" as they call it. The algae seems to give off a pungent smell that can sometimes make it unpleasant to be there. But there are areas where the smell doesn't seem to ever get so bad so you'll want to find those places.

I have a couple of things I want to do. I'm going to see if I can spot some oolitic sand. Oolitic sand is small rounded grains of sand that look like small pearls.

I'm also going to see if I can spot the Lake Monster. It is sometimes called the North Shore Monster. In 1877 some salt workers spotted an animal that looked like a crocodile body with a horse's head. They claimed the animal attacked them so they ran off and hid until the next day. Others have reported a creature that resembles a dolphin. I'll have my eyes peeled and let you know if I get a look at it. Better yet maybe I'll get a picture. That would be great.

Get out and explore someplace in your area. It can take as much time as you want. If you only have a free day use it to explore. Then let us know what you did and saw.
Exploring The World