Dill: It's Not Just For Pickles 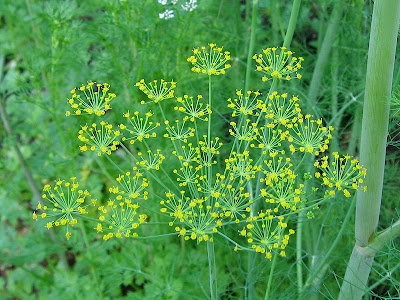 I love pickles, almost any kind of pickles. My favorite is dill pickles. When I was about nine months old my cousins came to visit from several states away. The only cousin I have that is my age is part of that group. The two of us ate almost a whole quart of homemade dill pickles that day. Yum.

As I got older I began to explore a bit and came across dill plants. That wonderful dill smell is unmistakable..It is clean, acrid, and sweet all at the same time. And I learned that dill is used for more than pickles. Who knew?

Dill is native to western Africa, southern Russia, and the Mediterranean. It is often referred to as dill weed. I am not sure if it is native to the Americas or came with immigrants as did so many other things we now call our own.

The genus Anethum has only one member and that member is dill. The seeds are full of flavor and have a stronger taste than its leaves. The leaves are fernlike and taste softer and sweeter. Both seeds and leaves are used in cooking. Even the flowers and stems are edible.

Dill contains calcium, manganese, iron, fiber, and magnesium. What it does is add and enhance flavors of foods that have higher nutritional sources. The best part is that dill has no calories so you will not get those hidden calories that often accompany food additives.

There are some superstitions about dill.

A small bag containing dill seeds placed in the baby's crib will protect the baby.
Because dill is bound to Mercury and fire it is considered to be a protection herb.
Carry a bit of dill with you and you will attrsct money.
A muslin bag containing dill that is placed under your shower water or in your bath water will
make you irresistible to the one you love.
Dill seeds are also called prayer seeds. Children chewing dill seeds during church services
would remain quiet and not become hungry during long sermons.
On the day of the wedding the bride should place a few dill seeds in her shoe and the groom
should have some in his pocket to ensure a happy marriage.
In Europe a bunch of dill sprigs hanging over the door was used to protect against witches
and sorcery.
Sachets of dill are used in love and lust charms.

Dill has many medicinal uses. Remember that your doctor should know about and approve anything you are using for your health. Sometimes natural remedies cause a conflict with medications prescribed by you doctor.

It has been shown to be a forceful anti-oxidant.
Dill calms digestive disorders. Perhaps the most important is relief from embarrassing
intestinal gas.
It activates hormones and enzymes to aid in to aid in restful sleep.
Eating dill on a regular basis can help prevent osteoporosis.
It is an antimicrobial as well as antifungal agent. For the best source of these properties use
the essential oil form of dill.
Dill is thought to ease the discomfort of coughs, colds, and flu.
It helps stimulate milk production in nursing mothers.
Furthers studies are needed but it appears to help reduce blood sugar levels in diabetics.
It stimulates the peristaltic motion of the intestine and at the same time is a useful treatment
for diarrhea.
Drink dill tea made from one cup of hot water and one to two teaspoons of ground dill seeds. Let
it sit for about ten minutes. Honey can be added as a sweetener. A few sips will cure hiccups.
Dill has been considered to be an aphrodisiac.
Chewing dill seeds and leaves will keep your mouth fresh and clean smelling.
Dill contains no cholesterol and many of its properties help control blood cholesterol levels.
Studies involving mice have shown that dill might be useful in preventing and treating cancer.
Dill has long been used to regulate the menstrual cycle in women. Some scientists believe it can
be used as a fertility agent.
Dill tea is used to treat headaches.
It is an excellent diuretic.
It relieves mucular cramps as well as menstrual cramps.
Dill is used to treat jaundice, nausea, liver problems, colic, acid reflux, sperm generation,
and high blood pressure.
It is also used to fight and prevent E-coli.
Ancient soldiers placed burnt dill seeds on wounds to promote healing.

There is a side effect to ingesting dill that you should be aware of. Some people experience a sensitivity to sunlight. In some cases it can be severe and cause a rash so be observant.

Foods are what most of us think of when thinking of dill. I mentioned pickles. It is used in salads, soups, casseroles. Add dill to your potatoes to bring out the new potato flavor. It gives a zing to fish. Dill makes great dips for vegetables and chips. Try using a dill dip in sandwiches instead of mayonnaise.

When using dill in hot dishes add it toward the end of cooking. The more it cooks the more flavor is lost.

As you can see dill is good for much more than pickles. But remember how good it is when you bite into your next pickle too.