At The Falls With The Rat 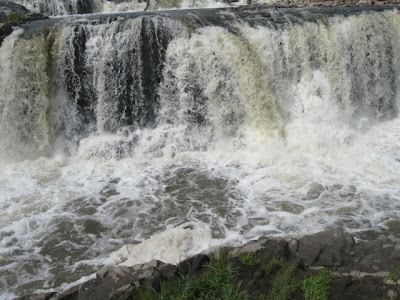 I took a little trip to visit our buddy Ratty last week. We took a day trip to Sioux Falls, South Dakota, to see the waterfall there. Ratty had never seen a waterfall before and as you might guess there's not a lot of water in my neck of the woods to fall. So we grabbed Isabella, Ratty's dog, and off we went.

I was surprised to see waterfalls in South Dakota because I think of it as a kind of barren state. Actually the part we were in was green with cornfields and soybean fields and lots of livestock. As you can see the falls are good sized. 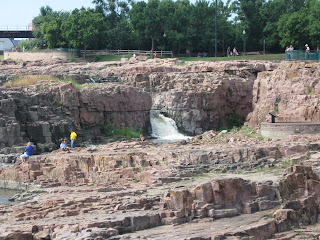 What I found the most interesting was the layout of the place. The waterfall is actually a series of falls that cascade down over these smooth rocks that I thought might be granite. They turned out to be quartzite that has been worn smooth and shiny by the water. Quartzite is sandstone that has been subject to heat and pressure to form a harder stone.

Among the falls are fields of quartzite that you can walk out to get a closer look at the water. You can see some people on one of the rocky places in the picture.

The roar of the water as it falls over and crashes to the pools below is very loud. Ratty made a nice video that captures the sound. If you'd like to hear it go to Ratty's Everyday Adventurer site and watch the video. Just click here. I can almost feel the spray of the water when I watch it. 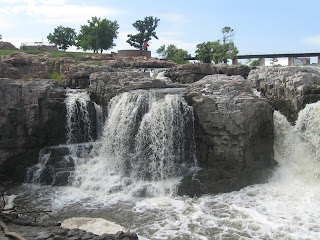 As I said before this is a series of waterfalls. They start way up in one corner of the park and continue on down. It's really something to see.

All the way from start to finish are observation decks and benches for people who want to just sit and listen to the sound of the water. There is an observation tower with a deck all around at the top to get a bird's eye view of the park.

Personally I liked being down by the falls. The fresh water smell and the sound of the water rushing is an experience. You can't see the violence of the water when it hits the water below the falls unless you are right there. 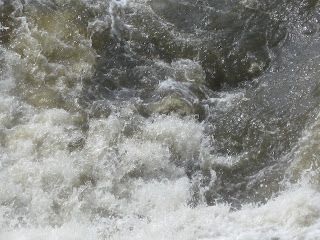 That was the most fascinating part to me. The water crashing and churning over itself is primal. It's constant with new water falling onto the water that already fell and is flying back up from the force of it's landing. The pressure and force of the water there must be hard.

There are bridges that let you cross over the water too. You can stop and watch the falls from there too. There are so many different views and each one is as spectacular as the last one. 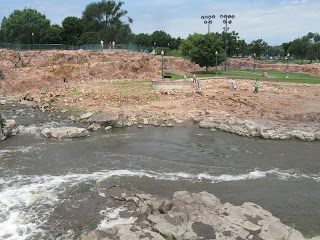 The river is the Big Sioux River. After it has it's playground at the waterfalls it flows lazily all the way down to Sioux City and empties quietly into the Missouri River.

So Ratty treated me to a day that we both enjoyed. It was a good adventure. Even Isabella was tired when we got back to Ratty's place. She went right to bed and I wasn't far behind.