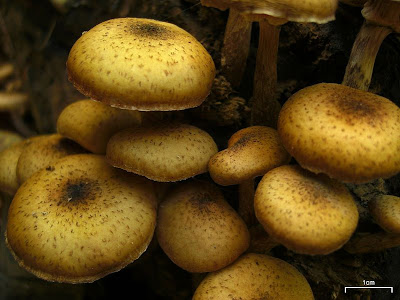 A mysterious giant mushroom cluster has been found in Yunnan province of China. It weighs 33 pounds and is 3 feet in diameter.

It was discovered by villagers so experts have not yet identified exactly what type of mushroom it really is. They are calling it a honey mushroom because it closely resembles the honey mushrooms in color.

It is not known if the giant mushroom is edible or poisonous. Until testing can be done no one is trying to eat it. China cultivates about 50% of all the mushrooms for eating in the world.

In 1998 a giant honey mushroom was discovered in the state of Utah. It is estimated to be about 2384 acres in size. That is the largest of record.

A honey mushroom was found in Washington state in 1992. At that time it was the largest organism known. It covered 1500 acres.

Because the mushroom in Washington was killing the trees in the forest researchers began to wonder if there were other mushrooms of comparable size killing other forests. They decided to look at a forest in Oregon.

In an ancient American forest there they found the largest living organism ever. A tiny microscopic spore embedded itself about 2400 years ago.

The mushroom spreads by sending out black filaments known as thizomorphs. As the mushroom grows in size it invades the trees themselves and kills them. It now covers more than 2200 acres.

The outline of the mushroom is three and a half miles across. It covers an area as big as 1665 football fields.

Researchers studied an area of dying trees. They collected root samples from 112 trees. All were full of fungus. DNA samples showed that 61of the root samples contained the same fungus.

Not much of the giant mushroom is seen above ground. It is mostly underground taking water and nutrients from the other plant life.

The honey mushroom in Oregon is edible. It does not very good but they say if you add garlic and butter it is not too bad.

Now scientists are looking for ways to control the fungus so it will not completely kill the forest. At the same time they realize that destroying the giant mushroom could also cause problems. After all it must have a purpose or it would not be there.
Labels: Nature News Bits