The Legend Of Pecos Bill 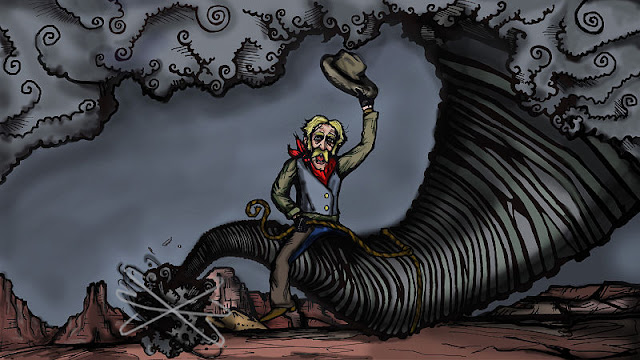 The tale of Pecos Bill starts way back. Bill was born into a family of 18 kids. His ma saw right off that he was a special one. His pa was proud as could be. Bill was born when his ma and pa were traveling west to get a good piece of land to all raise those young 'uns.

Before he was a month old Bill was talking. He cut his teeth on Pa's Bowie knife. And just as soon as he could sit up he was riding his first horse. And he was playing with animal young 'uns as soon as he could crawl and get out of the wagon they were heading west in.

Yessiree Bob, the whole family knew Bill was special. Then one day while they were crossing the Pecos River there in Texas Bill was bounced out of the wagon! He fell into the river and what with all those kids nobody even noticed at first. When they saw he was gone they looked for him but he wasn't anywhere to be found.

Well Bill decided he'd best learn how to swim, so he did. As soon as he found a good place to get out of that water, he climbed up on the bank. While he was wondering what to do next a mother coyote came to get a drink. When she saw that cute little baby boy she took him home with her and raised him with her pups.

Bill learned to howl and wrastle with his adopted brothers. He chased prey and ate what they ate. He had the time of his life and forgot all about his old life.

On the day Pecos Bill turned 16 he was down at the river. He saw a cowboy watering his herd of cattle. The cowboy looked up and was surprised to see another person there. Especially when he saw that that person was the spitting image of his mother who had died of a broken heart after losing her baby to the Pecos River.

"Hello, Brother" The cowboy was excited to see his long-lost brother.

"So do a lot of other folks. You're my brother. If you're a coyote, where's your tail?"

Then and there Bill saw that he was a man. He said so long to his coyote family and left to learn how to take care of the cows with his brother.

Bill learned fast and soon became one of the best cow wranglers around. He saw that the cowboys had some trouble with some of the more cantankerous cattle. Now Bill would just jump on the backs of those cows and ride them until they settled down. But not all the cowboys were as tough as him. To make it easier to get those cattle in line, Bill invented the lariat to lasso the animals and make them do what was wanted. Then he taught the other cowboys how to use them.

Of course there were those who would steal the cattle and claim them as their own. Pecos Bill decided that a way to permanently mark them would prove ownership. So he made a branding iron and marked all the cows in the herd.

As you all know a cowboy needs a horse. But Pecos Bill wouldn't have just any horse. He needed one that had as much gumption as he had. Now there was a horse that a lot of cowboys had tried to break for riding. but it threw them all.

Pecos Bill watched them try to stay on the horse one day and was amused by them all. The horse was named Widow Maker because he had made widows of lots of cowboy wives. After he laughed at the futile tries of the other cowboys Bill told them he was ready to show them how it was done.

That tornado turned the whole sky black and green. Everything in its path was swallowed up. It laid waste to trees and houses. Don't you know that old Pecos Bill just grabbed him a lasso and caught that tornado. He jumped on and rode it just like a bucking bronco.

Bill rode that tornado all over the place. It went to California and dumped rain such as had never been seen before. It rode over Nevada and dug the Grand Canyon. It flattenned out the middle of the United States forming the Great Plains.

That tornado tuckered itself out. It was down to practically nothing when Bill fell off. He landed so hard he left a big dent in the ground. Most folks call that spot Death Valley.

Pecos Bill had pretty much tamed everything in Texas that was worth taming so he set off looking for adventure. He came across an old prospector and asked him where he could find the hardest gang around. The prospector told him but said it was a good piece to travel.

Bill had left Widow Maker behind for this trip and soon he was sorry. The sturdy horse he had chosen gave out in the rugged country they had to cross. Bill didn't leave the horse behind. He just picked it up and carried it on his shoulders for the next hundred miles.

Along the way he came across a 50 foot rattlesnake. It was looking for trouble and you know Bill never ran from trouble. He made that rattlesnake surrender. It was his. He coiled it up and hooked it over his saddle horn. He used it as a lasso from then on. He had a smaller rattlesnake he used as a whip.

The way Pecos Bill tamed Widow Maker, the way he used his lasso to rope cattle, and the way he took care of all his animals gave birth to the modern day rodeo.

When he reached the camp of the hard gang he marched in and yelled, "Who's the leader around here?"

One big mean looking fella looked at him and said, " I am but now that you're here I reckon you are."

So Pecos Bill had him a loyal bunch who helped him tame the West.

Now Pecos Bill liked women and women loved Pecos Bill. He had his pick of any and all the female types where ever he went. But Pecos Bill never fell in love with any of them. He liked those fillys too much to limit himself to just one. That is until he met Slue-Foot Sue.

One day Pecos Bill was watering his horse at the Rio Grande. Riding a giant catfish and shooting pattens in the clouds was a cowgirl. She was whooping and hollering the whole time. Bill was stunned. When she stopped to say Howdy Bill could hardly talk.

Bill knew that Slue-Foot Sue was his one true love. He proposed to her right there on the banks of the Rio Grande that day and they made big plans for the wedding.

For a wedding present Bill shot all of the stars from the night sky just to show off to Sue. He shot them all out except for one lone star for the Lone Star State.

Folks came from all around to see Pecos Bill and Slue-Foot Sue get hitched. They were a perfect match. Sue could ride, rope, and shoot almost as good as Bill.

For a special wedding Sue wanted to ride Widow Maker to meet up with Bill. Bill figured if anybody could handle Widow Maker it would be Sue.

Slue-Foot Sue's wedding dress was of the purest and whitest white. In the style of the day she wore a bustle in the back under her dress. Now this bustle was made of a strong coil of steel to give her that fetching bottom that women desired and men liked to look at.

Sue proudly rode Widow Maker in front of all the wedding guests and up to meet Bill. All of a sudden Widow Maker started to buck and jerk. Sue held on for dear life but Widow Maker threw her. Luckily she landed on that steel bustle. Unluckily she started to bounce.

Poor Slue-Foot Sue. That bustle was a good one. It took the blow of Sue's landing and bounced her back up. When she landed she bounced back a little higher. She bounced for 3 days and 4 nights..

Some folks say that after all this bouncing Slue-Foot Sue begged Pecos Bill to shoot her to put a stop to it. I happen to know that she in fact bounced her way up to the moon and was not ever able to come back.

Some folks say that Pecos Bill went with her. I happen to know that he was still in Texas but he might have found a way to visit her from time to time. Those folks say that thunder is really the offspring of Pecos Bill and Slue-Foot Sue up there on the moon raising a little ruckus.

Bill had a dozen more wives. He did like his women. But he never loved one like his Slue-Foot Sue.

None of us gets to live forever and Pecos Bill was no exception. A man like him deserved to die like a hero. After all he was the roughest toughest cowboy that ever lived.

Now you know Bill was getting a little long in the tooth. He was getting old. One day a man from Boston was in Bill's part of the country for a visit. He wanted everybody to think he was a cowboy too. So he got a suit from the mail order catalog. He got all gussied up with his brand new blue jeans and clean crisp ten gallon hat. He had a shiny brass belt buckle and lizard skin boots.

That dandy thought he could fool them all. He strutted around with his fringed suede jacket and his thumbs tucked so manly in behind his belt. When he went to saunter into a bar with his outfit and a big swagger in his step Bill happened to see him.

Pecos Bill laughed and laughed. He couldn't stand anymore so he fell to the sidewalk and laughed some more. The truth is he laughed himself to death. And that is the story of Pecos Bill.