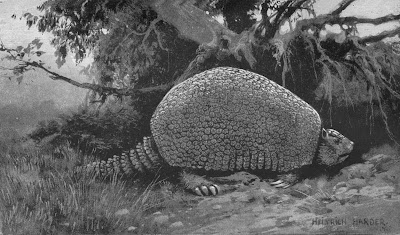 With all the talk about global warming I started to think about what would happen if it was global cooling instead. Then I remembered that the Earth has already done that.

The last Ice Age was only 80 thousand years ago. That's not much compared to the age of our planet.

Before that time giant mammals roamed freely over the Earth. In North America these huge beasts had to move to warmer locations.

About half of North America was completely covered with ice. But south of the ice sheet the land was amazingly richer and more fertile than it was before.

Excavations of the tar pits in California have already yielded fossils for more than 600 species of prehistoric animals. Scientists have been able to reproduce what the animals looked like and what their habits were from the fossils.

Scientists believe that the ice sheet was about 2 miles high. It acted like mountains would. Winds blowing across the ice sheet carried a lot of moisture over the deserts of North America and created fertile marshes. The glyptodont, pictured above, was very happy there. The glyptodont could swim and it ate water-based plants. I think it looks a lot like an armadillo.

Sabretooth cats are a favorite of almost every kid. They are big and ferocious looking. Those 7 inch fangs look like they could do a lot of damage. Truthfully those fangs were so long that they snapped off pretty easily. They would get stuck in the bones or sinews of their prey.

Lucky for them they had big muscles and paws. Big cats of today use those to kill their prey by suffocation or breaking their windpipe.

The pre-Ice Age cats held their prey steady with their paws and legs. Then they would open their mouths and kill the prey by either biting or stabbing with their teeth. The sabretooths had a large temporal bone that let them open their mouths 2 times as wide as a lion so they could take a bigger bite. Then the prey would bleed to death.


The shasta ground sloth lived in and around the Grand Canyon It was about the size of a grizzly bear weighing about 500 pounds. It had huge paws big enough to swat away a sabretooth cat. It ate tough vegetation that most other animals couldn't digest.

Scientists have found huge piles of the shasta ground sloth's dung and they are perfectly preserved. In the caves high in the canyon walls that were used as lairs the air is too dry for the waste piles to decompose.

Dung can tell a lot about an animal. Shasta ground sloths died out in the middle of the last Ice Age. No dung has been found to date after that. The cold dry temperatures weren't conducive to growing the vegetation they ate. They had such a slow metabolism that they couldn't stay warm enough and they weren't able to move to more compatible locations.

Wooly mammoths are often thought to be the biggest of all the mammals but the Columbian mammoth was several feet taller. It was maybe taller than a horse on the shoulders of a cow.

The Columbian mammoth ate about 2 tons of grass each week. As ice took the place of sea water the grass was not as readily found so they roamed looking for more. Sea level was almost 400 feet lower than it is today.

Just north of San Francisco scientists have found a lot of clues about the movements of the Columbian mammoth. Large rocks on the coast were worn down until they were smooth by the mammoths. The spots that were polished were too high for any other animal to reach. They were used to rub dead skin and bugs off.

So many animals ceased to exist because of global cooling. It seems like all the time that was happening it made way for new animals including us to develop. It will be interesting to watch what happens with global warming.