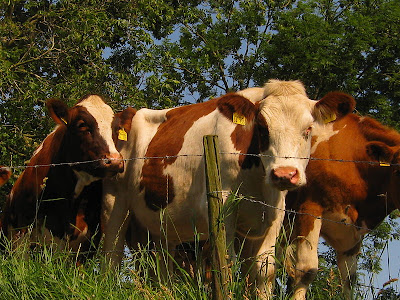 Animals are all around us. Some we keep as pets, some we try to get rid of, and some we like to look at from a distance. There are heroes in the world of animals. Sometimes we know about them. It makes me wonder how many heroic acts are never seen.

Norman was a golden lab adopted from the dog pound. His new owner wanted him even though he was born blind. It was hard for Norman to get around. He loved the beach because it was the one place he could run free in safety.

One day on the beach as Norman and his owner were walking Norman heard a call for help. A girl had been swimming with her brother and she got caught up in a strong current. Norman swam out to her and brought her safely back to the shore.

In Cameroon hunters captured a young gorilla. The pack of about 60 gorillas stormed the village and rescued him.

A herd of antelope were captured and were scheduled to be killed the next day. Eleven elephants went to the large cage the antelope were in. One of the elephants carefully opened all the locks with her trunk and swung the gate open. The elephants stood guard until the antelope escaped. Then they quietly walked off into the night.

A tsunami hit Thailand in 2005. An 8 year old girl from England was saved from the sudden waves by an elephant. She rode the elephant who took the force of the impact of the water and kept the little girl above water.

Four lifeguards, 1 male and 3 females, were training off the coast of New Zealand. Suddenly a pod of dolphins circled round them. The dolphins edged the swimmers together and started slapping the water with their tails. After about 40 minutes the man escaped through a small opening. That's when he spotted the great white shark moving closer. The dolphins became extremely active and kept slapping the water with their tails.

Finally a rescue boat appeared and the shark went away. The dolphins waited to make sure all the swimmers made it safely to shore.

During World War I a battalion of more than 200 men were trapped on a hillside in France. They were out of food and out of ammunition. They had sent messages with carrier pigeons but they were all shot down.

The last pigeon they had left was Cher Ami. They attached the message canister with the message inside to Cher Ami's leg. The message let them know where they were and that they were being shelled by friendly fire.

Cher Ami was shot in his breast, blinded in one eye, and his left leg was hanging on by only a tendon. But he made it through and delivered his message. He saved 194 men that day.

Army medics carved a wooden leg for Cher Ami and he was proclaimed a war hero. He was returned to the United States where he died probably from his war wounds. His body is on display in the National Museum's Price of Freedom exhibit.

While serving in Afghanistan a sergeant of the US Army made friends with one of the feral dogs that roamed the countryside. Two female dogs also became pets of the unit. One night while the men were inside their barracks the dogs started making a lot of noise.

Some of the men went to check on the dogs and the barracks door flew open. A man dressed in the clothes of the local people stood there with the dogs holding on with their teeth and clawing at him. The man finally detonated the explosives he was wearing.

Five US soldiers were wounded but none died. All the dogs were seriously wounded. One of the females gave birth to a littler of four puppies. One female died from her wounds.The other female and the male survived wounds and burns.

When the soldier returned home he fought hard and was finally able to have the two remaining dogs sent to him. He kept the male and the female was adopted by a soldier in another state.

Animals are brave and loyal. All they ask is to be allowed to live in their natural habitats. I like that idea.