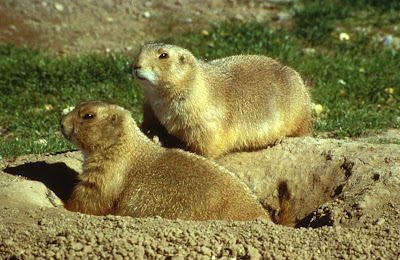 Prairie dogs are found in North America from northern Mexico, through the western grasslands of the United States, and on up into Canada. If you look at the picture you can see they don't look like dogs. That's because they are rodents, part of the ground squirrel family.

The reason they are called prairie dogs and not prairie squirrels is because of the barking sounds they make. The Lewis and Clark expedition journals have recorded that they discovered a village of "what the French call the Prairies Dog."

The scientific name for prairie dog is cynomys which means dog mouse in Greek. The animal is between 12 and 16 inches long and weighs between 1 and 3 pounds.

On TV and in movies you often see prarie dogs heads sticking up out of their burrows. They live in these burrows that are connected underground and can extend for several miles. These burrows form colonies or towns that contain thousands of prairie dogs. The largest recorded prairie dog town was noted in 1900 in Texas. It covered about 25,000 miles and was home to around 4 hundred million prairie dogs.

The entrances to the burrows are meticulously cared for. They are surrounded by cone-shaped mounds that are tamped down into hardness.  Some of these cones are used only as entrances but most are used as observation posts. The prairie dogs manning these posts alert the whole community with a series of barks before they disappear into their hole.The holes probably provide ventilation for the burrows too.

Inside the holes are chambers. Each chamber has a specific use. There are chambers for nurseries. Some chambers are sleeping quarters. Some are for hibernation in the winter. They even have chambers that serve as toilets.

There are usually 15 to 20 family groups in a prairie dog town. A family is headed by a male and 2 to 3 females with a small number of young ones of each sex.

Females usually have 3 to 5 pups at a time but they can have as many as 8. Interestingly enough even though there is a male ruling the family the female might have pups by as many as 5 fathers at a time. The male will sometimes kill them. Sometimes other females in the family will kill them. It's not known if there is a jealousy factor or if it just makes life easier if the pups of the remaining female are nurtured by the mother who lost her pups.

Rattlesnakes, badgers, and burrowing owls can invade to kill the prairie dogs in their burrows. If the little rodents are caught outside they have to watch for wolves, coyotes, hawks, eagles, and other animals that want to make a lunch of them.

Ranchers are also an enemy to prairie dogs. All the holes that open into burrows are a hazard. Livestock and horses step into the holes and break their legs. Prairie dogs eat the same grasses that are used for grazing for the livestock. So the ranchers have destroyed great numbers of the prairie dogs.

Once believed to be the most abundant mammal in North America with hundreds of millions of the little guys living here, the prairie dog now is only tens of millions in number. One species has almost completely been destroyed.

Disease plays a part in the destruction of the prairie dog too. Bubonic plague is a major problem.

It is believed that prairie dogs have a complex "language" that they use to communicate. A series of barks in varying ranges and amounts as well as tones and spaces make up the language. It is used in mating rituals. They use different calls to alert the rest of their colony to threats from different animals. It is thought that each predator or type of predator earns a special call so the community of prairie dogs knows how to best protect themselves.

Interesting animals, aren't they? It's really a shame that their habitat is being severely reduced as we grow as a nation.
Labels: Nature Fun Facts