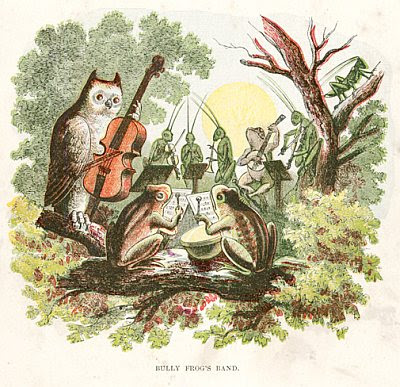 Today I want to look at some of the weird things that have happened recently. Some may be a little harsh so check the stories before you let the kids take a look at this one. In some of the tales you might see that humans are the ones that are really strange.

In Alaska a pickup truck was parked outside a grocery store. About 2 dozen bald eagles were hanging out in the bed of the truck and circling overhead. They were noisy and creating a nuisance. Turns out there were bags of fish scraps in the truck. The alarm for car next to the pickup was set off by all the noise. Finally a policeman came and chased them all away.

On Mothers' Day a woman in Florida looked out her front door and discovered that her prankster husband was at it again. There was a huge blow-up alligator sitting on the front porch. She went to tell her husband she wasn't fooled and he said he didn't know what she was talking about. They went to check and the alligator started hissing at them. They called wildlife officials who sent someone to drag it off the porch by its tail. After they taped its mouth shut they took it Everglades Holiday Park for evaluation.

At 130 years old, Thomas was the oldest tortoise in Britain. He lived through 2 world wars and the reigns of 6 British monarchs. He was even rescued from the rubble after his owner's house was bombed during the Blitz of World War II. Thomas was born when Gladstone was Prime Minister of England.

Thomas had a run in with a rat in the garden he called home. He got bit. The vet prescribed antibiotics for the infection but Thomas didn't get better. Finally they had to put him down.

It turns out Thomas has been keeping a secret in his shell. He was a she! Actually the owner found out about 30 years ago but didn't have the heart to betray the secret.

A squirrel in California has tested positive for the plague. The plague is a bacterial disease of rodents. It is transmitted to people by fleas that eat the blood of the rodent and then inject it into humans. People, especially campers, need to saty away from squirrels and their homes. Never feed them and son't let the kids play with them.

In New Mexico firemen were called on for a rescue. They used an aerial ladder to reach a business sign. Stuck on a loose piece of the sign was a Great Horned Owl. The owl was later examined and found to be healthy and unhurt.

Prisoners at Durham Prison are keeping themselves busy by making bird boxes. The boxes are put into place by people from Durham University. The boxes should attract a wide variety of birds.

A moose decided to make its home in Clarkson, North Dakota. After about 10 weeks the proper authorities chased her away. Two weeks passed before she came back again.

A photographer in California spotted a hawk being harassed by red-winged blackbirds. He figured he'd get some good shots of them as the hawk flew away. And he did. One persistent blackbird did more than chase. It actually caught the hawk and landed on its back to take a ride.

In Florida a man was pulled over by police for a routine traffic violation. The man jumped from the passenger side of the car, broke through a fence, and got away. Several hours later the man was found in the hospital. He told police he had run near a water treatment plant and was attacked by an alligator. He had multiple puncture wounds all over his body. He was charged with several crimes. I think credit for capture should go to the alligator.

A raccoon caused all kinds of problems in Kansas. It got into a power substation. That caused the power company to switch to a secondary substation. The switchover messed up equipment that transmitted a local television station. They repaired the damage caused by the raccoon as fast as they could but people in the area were without their favorite programs for hours.

Two puppies fell into the well. The owner of the puppies was looking for them but sometimes in India small animals come to a bad end. Then he saw the mother barking over by the well. Sure enough there they were. Luckily the well was practically dry. One side was very wet mud but they were on fairly dry ground. Unfortunately they were sharing the well with a King Cobra.

It took 2 days for the snake handlers to come. The man was sure the snake would kill the pups and eat them. Instead the cobra kept the pups from going into the mud where they would probably have drowned. The snake was captured and released into the forest. The pups were saved and very happy to see their mother.

In New Jersey a groundhog terrorized little league baseball players, coaches, and even umpires. The president of the league was chased to his car by the large animal. It was fast and baring its teeth all the way. Police managed to capture it and get it in a cage. Since the animal hospital was closed the police left the groundhog in its cage on the doorstep. They left it with a can of cat food and water. When hospital personnel came the next day the cage was there, the empty cat food can was there, but there was no sign of the groundhog.

Two bald eagles crash landed on the runway of a Minnesota airport. They had been fighting in the air and their talons locked together. They couldn't untangle themselves in time and fell. A Natural Resources Officer wrapped them in blankets and put them in the back of his truck to take them to the wildlife rehabilitation center. As he was driving he heard a commotion and saw one of the eagles fly away. The other bird is being taken care of at the center.

Firefighters from Alaska took a trip to Idaho. One of their favorite things to do there was capturing lizards and snakes. One of the men decided to keep a 2 foot garter snake as a pet. Too bad that it's illegal to take snakes on the plane. Two six inch snakes were found on the plane after it landed. Neither of them were Isabelle which was what he named her. But police went to his house anyway to confiscate his pet. He said she was the only one he had taken but there were 4 smaller snakes in the box Isabelle was kept in.

As their natural habitats shrink we are seeing more and more animals in places they would never have gone before. Never approach a wild animal unless you are a traind professional and have taken all necessary precautions.