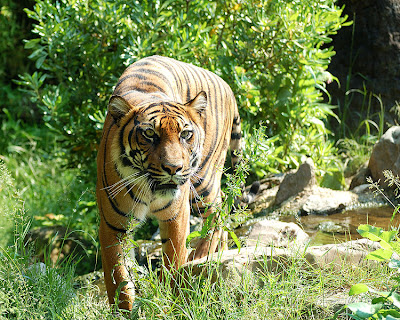 Most of you are familiar with the term distemper when we talk about dogs. The canine distemper virus (CDV) was recognized at the beginning of the 20th Century. It is a close relative of measles and only affected dogs. It was such a problem that there is now a preventive vaccine given to dogs to prevent spread of the disease.

Now they are finding cases of distemper in wild animals. They believe that CDV was a big reason for the thylacine becoming extinct. The thylacine was known as the Tasmanian tiger because of the black stripes on its back.

The CDV has evolved to infect a variety of animals, even marine mammals. The big cats seem to be the most in danger partly because their numbers are already decreasing.

In the mid 1990's about 30% of the lions in the Serengeti, Africa, died from CDV.  It was contracted from dogs in the villages in the area.

In the Russian Far East some of the big cats have been acting strangely. They seem to lose their fear of humans and just wander into villages. They become easy prey for hunters and poachers because they have lost that fear.They even wander into traffic because the fear is gone.

Some of the big cats die from respiratory problems like pneumonia. Some die from seizures and other neurological conditions.. The symptoms can vary.

Apparently some of the big cats have built enough of an immunity to CDV to recover from distemper. There aren't any accurate numbers of infections, recoveries and deaths because CDV is a recent development. A true diagnosis is hard without being able to examine brain tissue.

They assume that dogs are the only transmitters of CDV to other animals. Dogs are captured and eaten a lot by the big cats. But there will have to be more studies done to see if the animals are now transmitting to each other or if CDV is present in other places.

The Sumatran tiger is found only on the island of Sumatra. Wildlife veterinarians there believe that CDV might already have infected a big percentage of the tiger population. Sumatran tigers are critically endangered so this could mean the end for them. They are hoping to identify and find a way of dealing with CDV so they can save the tigers from extinction.