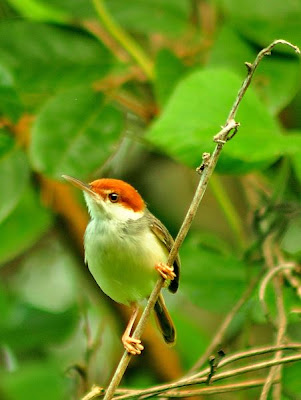 A new species of bird has been found in Phnom Penh, Cambodia. In 2009 during routine testing for avian flu a bird was found that was distinct from others. Since that time there have been others of the same species found in the city and rural area around the sity.

Tailorbirds are warblers. They have pretty songs. They are called tailorbirds because they carefully weave their nests in the same way a tailor might make your clothes.

So how do they know that this tailorbird is a different species? Observation was first. It didn't look quite like the others.

They listened. The song of the Cambodian tailorbird is distinctly different from other tailorbirds.

They examined feathers. Feathers from tailorbirds have similarities. But each species has differences from other species of the same family.

They tested DNA samples. The results of all these tests prove that the new species was found.
Nature News Bits