Why Do Tigers Have Stripes? 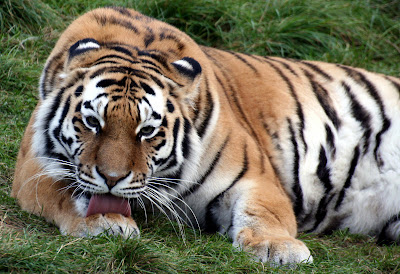 The huge tiger crept silently through the tall grass, watching its prey every step of the way. The tiger was ready to pounce at just the right moment. The other creature had no idea the tiger was there because it was hidden very well in all that tall grass.

Just a small example of how a tiger hunts. A tiger is like most cats; it makes it a habit of sneaking up on its prey before it goes in for the kill. It's pretty obvious that it knows the best way to do it. But what does that have to do with a tiger's stripes?

Well, it has everything to do with why a tiger has stripes. Hiding in that tall grass can only get a creature as large as a tiger so far. The tiger has to have something extra to help it sneak up on its prey. That's where the stripes come in.

When a tiger is standing or crouching in tall grass, its stripes go up and down, just like that tall grass. And the golden brown color of the grass is remarkably similar to the colors of the tiger. That gives the tiger a natural camouflage that makes it much easier to hide in the tall grass.

It was evolution that gave the tiger those stripes. The tiger that was able to hide the best was the one that got its prey. That tiger was able to survive. The other stripeless tigers were left by the wayside of evolution.

Those stripes run deep. They are not just in their fur color. A tiger's stripes are embedded deep into its skin. I wonder what it would look like without the fur. Forget that part. My mind drifted off for a few seconds there. It's still true though.

So anyway, we now know that the miracle of evolution gave the tigers stripes so they could hide better in the tall grass, and their prey would never know they were close until it was too late. Then the tiger's stripes enabled it to be fed so it was one tiger that didn't go hungry. I'd say that's a pretty good explanation of why tigers have stripes.