Under The Sea: Lost Lands 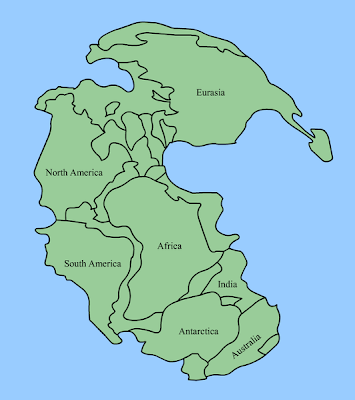 Atlantis was the super advanced continent that was swallowed by the ocean leaving no traces and no survivors, according to myths. Scientists mostly agree that Atlantis, at least as an inhabited continent, was not real. But there are others. Lands that are no longer above sea level.

Pangea was a supercontinent that many scientists believe existed around 300 million years ago. This large land mass broke up and formed the seven continents we have today.

Other supercontinents like Kenorland, Columbia, and Rodinia  may have been here before Pangea. Sizes and shapes are not certain.

Rodinia is believed to have formed about one billion years ago. When it broke apart Pangrea was the result.

From science classes in school we learned about tectonic plates and how their movement causes earthquakes. Earthquakes are a dramatic movement of the tectonic plates. The fact is that the plates move all the time. They are responsible for creating mountains too.

When tectonic movement caused Pangea to break apart into several continents there were other things that happened. Microcontinents were formed but they sank below the oceans.

The Campbell Plateau is part of a large continental structure that also includes New Zealand. The size of the structure is similar to the size of Australia. Because most of it is beneath the water New Zealand is considered to be an island while Australia is a continent.

Microcontinents sometimes come together to form larger structures. Gondwana was a supercontinent. The northern African edge of Gondwana broke into pieces that resembled pieces of apple. Each of those pieces were microcontinents that moved north to become southern Europe.

Near the island of Mauritius off the coast of Africa scientists found evidence of a microcontinent. They are calling it Mauritia. The beaches of Mauritius have sand that contains fragments of zircon that are between 660 and two billion years old. Mauritius is nowhere close to being that old. The theory is that Mauritia was submerged when India broke away from Madagascar around 85 million years ago.

The continents of Asia and North America are separated by a thin strait. It is only about 150 feet deep. During ice ages or at other times when the sea levels are low the continents are actually connected by a land bridge called Beringia. It is widely accepted that people from Asia used the land of Beringea to cross into North America anywhere from 14,000 to 40,000 years ago.
A previously unknown landscape off the coast of Scotland was accidentally discovered by geologists who were examining ocean mapping data. It is buried beneath more than a mile of sediment. The estimated size is about 3861 square miles. It has furrows cut by rivers and peaks of what were once mountains. They think the land was elevated for a short time by geological processes about 55 million years ago. It was submerged again after about 2.5 million years.

Now scientists may have found a new continent submerged off the coast of Brazil. They have nicknamed it the Brazilian Atlantis. They do not believe that it is the legendary Atlantis. They do not believe that they will find lost cities. It just happens to be in the Atlantic Ocean. Perhaps it was a continent that was submerged when Africa and South America broke apart and formed the Atlantic Ocean about 100 million years ago.