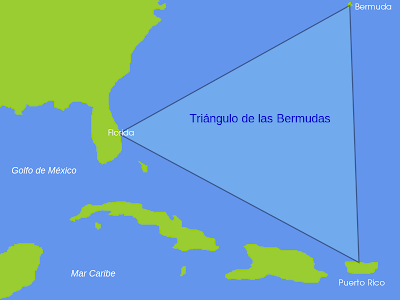 For 25 long agonizing years the Addams family has searched for their beloved Uncle Fester. They've tried everything. They even hold a seance every year to try to contact his spirit. Suddenly a man appears claiming to be that same Uncle Fester. It turns out that he had been lost in the Bermuda Triangle and in turn lost his memory of the past. Luckily he washed ashore and was rescued and returned to his loving family.

Most of us have heard the stories of disappearances and strange experiences in an area known as the Bermuda Triangle or Devil's Triangle. Ships and airplanes being lost with no trace of them ever found. Ghost ships completely intact but no sign of humans on board. Sudden fogs and eerie lights. I want to know more.

The usually accepted area of the Bermuda Triangle is situated over the Atlantic Ocean. The points of the triangle are Miami, Florida, San Juan, Puerto Rico, and the Island of Bermuda. Some people say it is larger. Some say it is not shaped exactly like a triangle because the sides aren't necessarily straight. Who know for sure?

The earliest recorded experience of the Bermuda Triangle comes from none other than Christopher Columbus, the explorer who "discovered" a new world while looking for a shorter trade route to India. In his journals he reports bizarre compass bearings in that region. He and his crew observed strange dancing lights on the horizon and flames in the sky.

The Mary Celeste was a ship that set sail to Genoa from New York. It never arrived in Genoa. It was found unmanned about 400 miles off course just off the coast of Africa. Food storage areas seemed to be undisturbed. Personal items of those on board were still there. The last recording in the ship's log was made 9 days before the crewless ship was found. There was no mention of any storm or problems with the ship.

The ill-fated colony of Jamestown, Virginia, was the destination of the Sea Venture which set sail from England in 1609. The Sea Venture was flagship of a 7 ship fleet. The fleet ran into a strong storm and were separated. For three days the ship fought the storm. The ship began to leak rapidly and all hands were told to bail water.

They couldn't bail as fast as they were taking on water. They jettisoned starboard-side guns. When the admiral spied land the water in the hold was 9 feet deep. The crew and passengers were past exhaustion. They purposely grounded the Sea Venture onto the reefs of Bermuda. All 150 people aboard and one dog made it safely to shore.

The survivors salvaged parts from the Sea Venture and two smaller ships to rebuild and continue to Jamestown. In the meantime the longboat of the Sea Venture was rigged and set out for Virginia. That boat and crew were never seen again.

Flight 19 was a training flight of 5 military airplanes. The US Naval station in Florida was the starting point. The five bombers and their crews were conducting bombing drills that day. It was a routine mission. They were in radio contact with the naval base.

The lead pilot and instructor for the mission reported that instrumentation was not working properly but they were all fine. Then a message came that they were lost and couldn't get any bearings to set them back on course. After that there was no more contact.

Searchers went out and looked for the planes all the night and the next day. One of the search planes never came back either. 5 airplanes like the ones lost were found in waters off Florida in 1991. They were not the planes of Flight 19.

The Star Tiger was a plane carrying 25 passengers. It was on its way to Bermuda from the Azores. It was a 12 hour flight. With 1 and 1/2 hours left all radio contact was lost and no remnants of the Star Tiger or its passengers has been found.

A nuclear submarine named the USS Scorpion was returning from a training exercise in the Mediterranean. Headed to Virginia it radioed that it was about 6 days away. It was near the Azores. A week after it had not arrived or been heard from a rescue party went out. Nothing.

Eventually a Navy research ship found the remains of the USS Scorpion. It was broken into to major pieces lying under about 10,000 feet of water.

A passenger flight took off from San Juan on its way to Miami. There were 25 passengers and 3 crew members on board. The Douglas Dakota sent a message that it was 50 miles south of Florida, 20 minutes to landing. It was never heard from again.

The USS Cyclops sailed to Brazil with a load of coal. Manganese ore was the load it would carry back to Baltimore. The American Consulate General of Rio was a new passenger for the return trip. He insisted that the ship sail first to Bahi which they did. Then instead of sailing straight to Baltimore the ship's captain went to Barbados for fuel and supplies. After departing Barbados for Baltimore the USS Cyclops disappeared and was not heard from again.

Commercial airplanes known as the Super Constellation were designed after a carrier belonging to the US Navy. Flight 441 was one of these planes. It left a naval air station bound for the Azores. Besides the crew there were 42 passengers. They were all officers and their families. There were the usual regular contacts made. Suddenly no more transmissions of any kind. The plane with its crew and passengers just vanished. No trace has ever been found.

The Ellen Austin was a schooner that made regular trips from New York to London usually by way of the Bermuda Triangle. On one voyage it came across another ship moving at great speed. They found no one on board. As was the custom in those days the captain had some of his crew man the ship that they would eventually salvage for whatever they would find valuable.

After 2 days the ships were separated by a fierce storm. After the storm was over the rescued ship was nowhere to be found. Some claim that the Ellen Austin found the ship but again no one was on board. The captain sent some of his crew to salvage the ship. In a few days it disappeared and was never seen again.

A C54 is the military version of the DC4 commercial passenger plane designed to carry 85 passengers. The C54 left Bermuda with the pilot and 5 crew members. It ran into a thunderstorm. that was not anticipated at take-off. The plane changed courses several times to avoid the storm. Somehow it ended up in the eye of the storm.


It was tracked by radar for quite some time. Then the ground operator heard a faint SOS. The sound was so low that he ignored it thinking he wasn't hearing right. The low SOS was heard once more then silence. Debris from the plane was found over 300 miles from Florida. No survivors. The debris indicated sudden destruction..

T2 tankers were used during World War II to carry oil. The SS Marine Sulphur Queen was one of those tankers adapted to carry molten sulphur. Marine Sulphur Queen left Beaumont, Texas, with more than 15000 tons of molten sulphur. There were 39 members of the crew. The last message received from her was 2 days later. It was a routine meassage with no mention of any problems.

Efforts were made to contact the ship but there was no answer. Search began and after 19 days only some debris and a few life preservers were found.

These are only some of the more well-known occurrences of the Bermuda Triangle. Aircraft and sea craft both military and civilian have been involved. Big ships, small boats, big airplanes and small airplanes. As a matter of fact 2 lighthouse keepers disappeared from their lighthouse without a trace in the Bermuda Triangle. Lots of folks have reported problems while in the Devil's Triangle but they lived to tell about it.

It is known that compasses and other magnetic equipment go crazy in the Bermuda Triangle. There are places there where the compass will point to the true North Pole and it causes confusion until corrections are made. The only other place on earth that happens is in the Pacific Ocean where a lot of tsunamis happen.

Airplane pilots say it is common knowledge that there is a spot in the Bermuda Triangle where radio communication is interrupted. It's known as a dead radio zone.

Satellites from outer space have taken pictures of places all over the earth. Over the Bermuda Triangle the water glows white.

Some explanations for the happenings in the Bermuda Triangle are: sea monsters attacking unsuspecting ships, UFO's interfering with and capturing vessels and aircraft, and emanations from the lost Island of Atlantis causing them to sink and fall from the sky leaving no evidence. Wormholes and alternate universes are also mentioned.

More scientific ideas are: explosions and crashes causing them to sink immediately, storms in the area interfering with guages, pilot or captain error causing the vessel to veer off course and crash, equipment failure and structural flaws, and methane bubbles big enough to swallow a ship or a plane whole.

Still the mysteries are there. There is no definitive number of occurrences in the Bermuda Triangle but there are lists of many more than the ones I mentioned in this article. Think of how many were not reported.