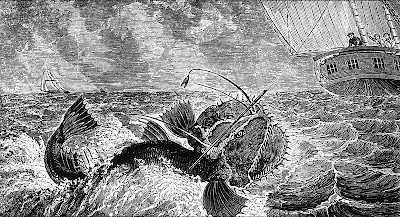 The dead body was found lying on Pukehina Beach of the Bay of Plenty on the North Island of New Zealand. It had a gigantic head with long sharp teeth. There were what looked like undeveloped flippers. The lower part of its body was mostly gone with only entrails left. Apparently the creature had been attacked by another creature. What was it?

A young woman taped the remains of the monster and posted on YouTube. Then she asked for help to identify it. Take a look at the video here.

There were a lot of creative ideas about what it might be. Maybe it was a baby Godzilla, a sea goat, Tremor's cousin, a dinosaur, a giraffe, or a mosasaur. My favorite is Chuck Norris's goldfish. Some thought it could be a dolphin, shark, or whale.

The video was viewed by a marine expert. He says it was a killer whale. He knows that whales often wash up on the beach in that area.  He believes that the flipper is identical to that of a whale. It looks like it had died in the water and washed up after a period of time.

If someone had notified the proper authorities they could have done tests to positively identify it.  The problem is that it washed back off the beach and out to sea. We'll never know for sure what it was.

So you've seen the video. What does it look like to you?