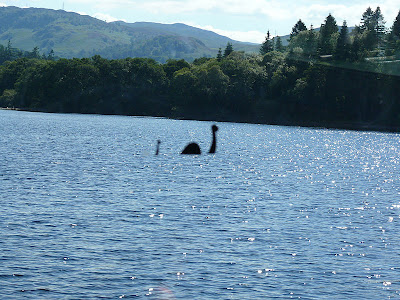 A lot of lakes around the world claim to have a monster. Loch Ness in Scotland is the most famous of them all.

The monster has been nicknamed Nessie. By the way, the picture I chose to go along with this article has been proven to be a hoax. There has been a lot of made up proof for Nessie and there is also a lot that seem to be true.

The Loch Ness monster is a cryptid. which just means the existence of Nessie has not been proved. It is not a myth which has no basis in fact or a natural explanation.

Loch Ness is the second largest loch (lake) by volume in Scotland. It is a fresh water lake about 755 feet deep. It holds more fresh water than all the lakes in England and Wales combined. There is plenty of room for an animal to hide.

Scotland was invaded by the Romans in the 1st century A.D. There they found the people they called Picts. The Picts were fierce tattoo covered people who lived in tribes. There are still stones standing around Loch Ness that were carved by the Picts.

The Picts left recognizable pictures of all the animals of the land in their carvings. They were obviously fascinated by them. There is only one animal that is not familiar. It's a funny looking beast with a long muzzle, a spout or head locket, and flippers instead of feet. The carved stones around Loch Ness show that Nessie has been around for at least 1500 years.

In 565 A.D. St Columba saw a man in the Ness River being threatened by a huge beast in the water. The Ness River flows into Loch Ness. The holy man raised his hand, invoking the name of his god and commanding it "go back with all speed". St Columba chased the serpent, as he called it, away saving the man. St Columba saw the monster at least one more time that year.

A future BBC correspondent wrote a book in 1974 about the Loch Ness Monster. In his research he discovered quite a few references to large animals in Loch Ness. All from before the 20th century. Many were eyewitness accounts.

In 1933 a new road was built along the shore of Loch Ness to give a view from the north side. A local couple was driving on the road when they saw a huge animal rolling and plunging on the surface. The report written for the papers called the beast a monster for the first time. The name Loch Ness Monster stuck.

Again in 1933 a couple said they saw a creature answering the description of Nessie lumbering across the new road. People flocked to Loch Ness to get a look at the monster. The media went crazy and sent correspondents to watch for the beast. Radio programs were interrupted to bring the latest reports. A circus offered a big reward for the capture of the monster. Boy scouts and other outdoorsmen sat on the shore waiting for a look.

A man who worked as an actor, director, and was a big game hunter found footprints. He made plaster casts and sent them off for identification. Tourists went crazy. The prints turned out to be from a stuffed hippopotamus foot that had been used as an ashtray. Needless to say the scientific community wasn't in love with Nessie any more.

But there have been more than 4000 eyewitness reports of sightings since then. The descriptions of the monster vary slightly but they all agree there is something there. They are not all people you would consider to be crack-pots. There are professional people like lawyers and doctors. Priests, scientists, policemen, fishermen,and school teachers. Even a Nobel Prize winner. All sober upstanding members of their communities.

In the 1950's a doctor from Inverness, the nearest town to Loch Ness, published a book containing sketches drawn from descriptions given by eyewitnesses. She told how many of her friends had been ridiculed for saying they had seen Nessie. Because of her book an aeronautical engineer decided to devote his life to finding proof of the Loch Ness monster. He did manage to get some film of something moving across the loch.

That book inspired new interest by some scientists. They started to seriously investigate Loch Ness for signs that there is something unknown to science living in the loch. Early underwater sonar detected large moving objects that they couldn't identify. In 1987 they found 3 objects using military technology.

The 1970's produced more advanced technology. Using both sonar and underwater photography they got pictures of an object that looked like the flippers of an aquatic animal. That led to some proclaiming that Nessie is a plesiosaur. A plesiosaur is an ancient reptile believed to be extinct along with dinosaurs about 65 million years ago.

Zoologists still have not caught the Nessie bug the way some would like. Maybe if there was a specimen for them to study they would be more receptive.

In the meantime there have been more sightings. Ordinary people see the monster. There have been several sightings of underwater movement by what appears to be an animal by several research teams. Most of them were not looking for Nessie. One of these teams said that the object was the size of a small whale.

A final note on the Loch Ness Monster. The man who exposed the picture that is above is a believer in Nessie. He has said he would stake his life that Nessie is real. He has seen her and hopes to see her again someday.

This spring celebrates the 80th anniversary of the 1933 sightings. There are big plans around Loch Ness and in Inverness. Who know? Maybe this will be the time the Loch Ness Monster lets us finally get the proof we need.

BREAKING NEWS:  I just read that a cruise line that gives tours in Loch Ness has insured it's  ships against beastly disaster. It will be protected in the case of damage from Nessie.