Skip to main content
Labels
Posted by Emma Springfield May 27, 2013

Ghost Town Rises From The Sea 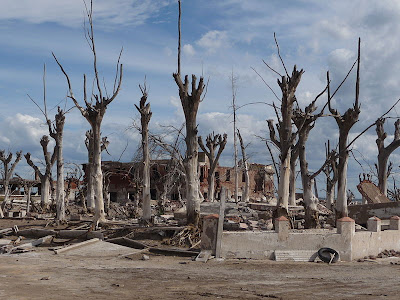 Epecuen was a busy tourist town in Argentina in the 1950's to the 1970's. Epecuen was established in the early 1920's. 1500 inhabitants were responsible for the 280 businesses that catered to the tourist trade. They could accommodate anywhere from 5000 to 7000 visitors.

Tourists came to the village on trains. They were the same trains that carried grain to be sold to the outside world.

More than 25,000 people would come each year for therapy offered by the salty waters of Lago Epecuen.  The salt content of the lake was 10 times more concentrated than the waters of the ocean. Many of the visitors said it reminded them of the waters of the Dead Sea.

In 1985 a rare weather pattern caused a seiche. A seiche is a stationary wave found in an enclosed body of water. This seiche cased the dam holding Lago Epecuen to weaken and break. A series of wet winters and a heavy rainstorm then caused the lake to overflow and break through the retaining wall that was a safeguard in case the dam broke.

Epecuen citizens could see that the town was going to flood with water very quickly. They escaped with what they could. Most of them relocated to nearby villages and opened new businesses. Epecuen was covered by 33 feet of water.

For 25 years Epecuen remained under water. Then the salt water began to recede. Today it looks as you see in the picture above. Only one man who is now 82 years old lives there now. He still lives on the edge of town and watches the new tourists coming to see the waste that was once a thriving village.

People are staying in nearby villages and booking tours to view the ruins of Epecuen. There are trees drowned by salt water. The buildings are all decimated from the flooding. Rusted vehicles are strewn about. Burial tombs are tossed about.

The pictures I have seen of Epecuen look like a town after it was heavily bombed in a war. What a sad fate for a little tourist spot.
Labels: Nature News Bits