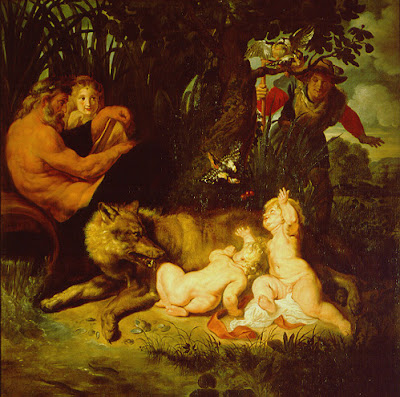 Mowgli was raised in the jungle by wolves in stories by Rudyard Kipling. According to Disney, Mowgli was raised by many animals in the forest. Tarzan was raised by great apes in the stories by Edgar Rice Burroughs. Romulus and Remus of Roman mythology were left to die only to be rescued by a she-wolf who raised them as her own. They went on to found the city of Rome (after Romulus killed Remus during an argument, he named Rome after himself).

In the Ukraine an 8 year old girl was found living in a dog kennel with the dogs. This happened in 1991. Her parents put her there when she was 3. She was not able to speak but she could bark. She ran on all fours just like the dogs. She has been taught to speak but she is behind other humans mentally. She lives in a mental institution and tends cows at a farm near the institution.

In 1867 a 6 year old boy was found following wolves into their cave in India. He ran on all four limbs like the animals. The hunters who discovered him smoked them out of the cave and killed the wolf then captured the boy. He was placed in an orphanage where he acted like any wild animal. He tore off his clothes and only ate food from the ground. He finally learned to eat cooked meat but he never learned to speak. He was in his 30's when he died.

A minister in India came across two little girls who were part of a wolf pack along with a mother wolf and her cubs. He took the girls back to civilization to live in his orphanage. They were about 3 and 7 years old. Eventually the girls stopped searching for the wolves but they never mixed in with other kids. The little one died the following year from illness. The older one did learn a few words but never really communicated well. After another 7 years she succumbed to illness also. The minister often wondered if he had made a mistake by taking them from the wild.

A 4 year old boy in Uganda saw his father kill his mother. He ran into the forest. He was discovered in 1991 but he refused to be rescued by villagers, as is often the case with feral children. The villagers chased the monkeys away and took the boy back. He was taught to speak and sing. He eventually became a member of Pearl of Africa, a children's choir.

The year was 2008. A 5 year old girl was found in an apartment in Siberia. She had animal characteristics and barked at people. She had been abandoned by her parents and closed in that house with only cats and dogs for company. She couldn't speak but she understood human language. She preferred to lap her food from a plate rather than use utensils. She would jump up against the door when her human caretakers would leave the room.

Russian police alerted the public to watch for a "werewolf" boy in 2007. Just one day from being rescued from a wolf's lair made of leaves and twigs and in freezing temperatures he escaped from a clinic where they were trying to treat him. His behavior was wolf-like. He walked with bent legs and his toenails were long like claws. He didn't speak and apparently didn't understand speech. He looked like he was about 10 years old but tests suggested that he was probably older. Because of his fear and wild behavior authorities believed him to be dangerous. He was captured and is now about 37.  He can communicate through sign language but he is still more wolf than man. They think his family might have been victims of political assassinations and he survived.

The wild boy of Aveyron was found in 1799 in a French forest  He was about 11 years old. He was unable to talk and lived like a wild animal. He never learned to speak but was educated well enough to live under supervision until he died ate the age of 40. The doctor who worked with him developed many of the techniques used to educate physically and mentally disabled people. His methods were used as the foundation of the Montessori Schools.

In 2002 a 7 year old boy was found in the forests of Transylvania eating the carcass of a dog.  He had lived in an abusive household. When he was 4 his mother left to escape the brutality and the boy ran away soon after. He lived in a cardboard box in the forest and at least on wild dog took care of him during the 3 years he was there. After his rescue he was shown on television and his mother saw and identified him. He was quick to re-enter the human race and they believe he will be satisfied at being human.

A 12 year old boy was found in the Andes Mountains of Peru in 1990. He was supposed to have been raised by goats for 8 years. He survived by drinking goat's milk and eating roots and berries. He usually walked on all fours. His hands and feet were scarred into a formation that acted like hooves. He could communicate with the goats but could not seem to learn human language.

When he was only 3 months old a Russian boy was abandoned by his parents. The family guard dog took care of him like he was a puppy. When he was found in 2004 he acted like a dog. He walked on all fours and bit people who came too close. He always sniffed his food before eating it.

A mother in Russia decided to conduct an experiment. Her whole apartment was filled with birdcages full of birds. She also fed wild birds at the windows. She had a son that she didn't beat and she fed him. But she never spoke to him. In 2008 he was 7 years old when discovered. He only communicated with the birds by chirping and flapping his arms like wings. The mother gave custody to the governement and he is being treated in a rehabilitation facility.

In 1946 a boy aged 10 to 14 years old was seen running with a herd of gazelles in the Syrian desert. It took an army jeep to catch him. because he could run at speeds of up to 50 MPH. He was extremely thin  but very strong and fit. He was captured and tied at the hands and feet. They believed that he had been in the wild since he was a baby. He was institutionalized and tried to escape in 1955 but was recaptured.

A chimpanzee family in Nigeria raised a little boy who was found when he was about 2 years old in 1996. He was physically and mentally disabled and had probably been abandoned by his parents. When walking he walked on his legs dragging his arms on the ground like a chimp. At night he would jump around and throw and smash things. After 6 years he was calmer but still acted like a chimp. He died in 2005.

A woman who lives in England has written a book called " A Girl With No Name: The Incredible Story Of A Child Raised By Monkeys". She was born in Colombia. When she was 4 years old kidnappers botched their attempt and abandoned her in the jungle.

She stayed with the monkeys and copied their behavior. She ate nuts and berries that they left behind. She began to forget about her family and even her own name.

About 5 years later hunters captured her and sold her to a brothel for a parrot. She escaped and took to thievery in the streets before being taken in by a family who named her and raised her the rest of the way.

She is now 60 years old with a family of her own. Her children say that she still clambers quickly up trees and catches birds and rabbits with her hands.

It's a sad fact that many young children are abandoned or lost in wild places all over the world. Most of them die or are lunch for wild animals. Then there are the ones who are adopted into the animal families.
Legends And Superstitions