Why / How Do Bees Make Honey? 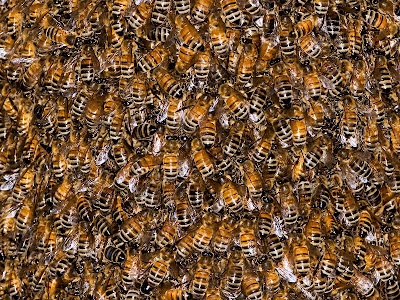 Honey is that deliciously sweet stuff that bees make, and we can buy in the stores in sometimes oddly shaped containers. I'm not sure of too many other products that animals make that we also use. Oh sure, you might say milk or eggs, but this is just a bit different. We're all pretty sure why those are made, but honey, while not a huge mystery, is a little more mysterious. What do we really know about bees and honey?

There are many things I didn't know. For instance, I always thought there were only two kinds of bees, the queen and the male drones. But there are also the worker bees, which are sexually undeveloped females. These worker bees are the ones that make the honey. 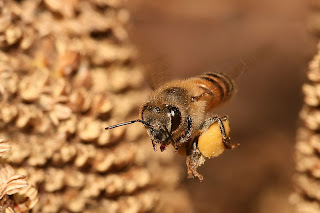 Worker bees start out by foraging nectar from flowers. So whenever you see a bee hovering around a flower, it's most likely one of the female worker bees. The nectar is the first step in making honey.

The bees actually collect this nectar in their mouths, where they mix it with an enzyme that they naturally secrete. Sounds yummy already, huh?

The bees then bring this combination of nectar and enzyme back to the hive, where they deposit it into the honeycomb, which is made up of hexagonal shaped cells. This is how they make the honey. But now we need to know why.

So, why do they do all this work? They surely don't do this so we humans can enjoy a nice gooey dollop of bee spit, do they? Well, no, it's obviously not quite as simple for us as that. Bees quite clearly do it for themselves, and not for us. But it isn't really a complicated reason at all either.

Before I just come right out and give you the answer, I need to explain a few things. You see, honey is full of nutrients and sugars. That combination gives a nice burst of energy to any who eat it, including the bees. Uh oh, I think I might have given away the secret already. But there's a little more to it.

The bees store this honey in the honeycomb for a very good reason. Honey is used as food for them in the colder months when there is no other food available for them. They are really making this honey as a way of planning ahead. It shows that bees are probably much smarter than many of us realize. They know that they won't have available food sources at some point in the future, so they go ahead and make and store honey for that anticipated time.

So worker bees make honey from a combination of flower nectar and a secreted enzyme that they then store in their honeycomb as food for the winter. A simple answer that deserved this bit of an explanation, don't you think?