Why Do Lions Roar? 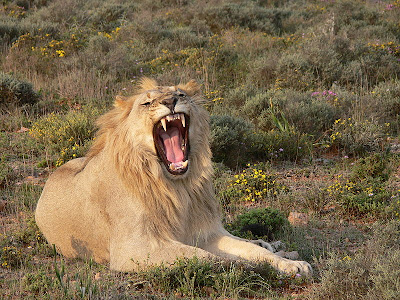 A lion's roar is a familiar sound to most of us. We've heard it many times on television at some point or at our local zoo. It's a pretty loud sound, isn't it? Many of us giggle at the sound, or at least find it interesting and amusing. That's because we're lucky enough to be separated from the lion that made it.

Both male and female lions roar, but the male has a roar that can travel up to 5 miles. At least, that's how far away a human can hear it. it's unclear how far another lion can be to still hear the sound, but almost certainly lions can communicate with each other for well beyond that distance. Only lions that are part of a pride roar. Solitary lions stay relatively quiet. That may give us a clue.

A male lion may roar to let the other members of the pride know that all is well. The female lion's roar is usually different than the male's roar. They are much quieter than the large male lions. A female can call out for roaming or lost cubs, and she can give a roar to bring the other adult pride memebers back to help in case of danger.

So a lion's roar can be explained rather simplistically. It is used to communicate with the rest of the pride. It's like a quick status update or a call to come home.
Labels: Why Is That?