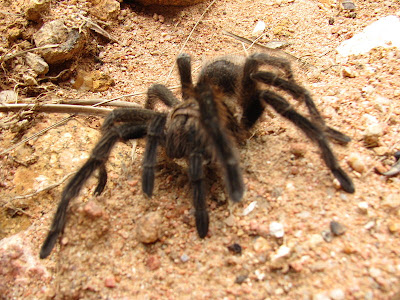 Tarantulas are a poisonous breed of spider. They inject poison into their prey which incapacitates the prey so the spider can move in and feed. Occasionally the bite is a defense mechanism but not often.

As far as I know the tarantula is the only spider to have a dance associated with them. The tarantella is a frenetic dance believed to have originated in Italy.

The tarantula bite was considered to cause a hysterical condition called tarantism. That made the people afflicted dance this rhythmic dance to counter the effects of the venom.

There is no recorded death attributed to tarantula venom although infections and side effects have caused people to die. The Tarantella often caused problems because of the exhaustion of the dance.

Even though a tarantula bite will probably not be lethal to you it can be extremely painful. Sometimes the pain and itching will last for several days.

Researchers were doing an arachnid survey in Sri Lanka. A man came to them with a dead tarantula that was different from other spiders he had seen. The researchers thought it was different too.

Without a live specimen the man's spider was of little use. It could be a different species or it could be some sort of mutation. Without live spiders and more of them nothing more than a written description was useful.

Because of the recent civil war in Sri Lanka the group of researchers needed a police inspector to go with them as they looked through the forest for spiders. They found enough spiders to identify them as a potentially new species. As a matter of fact they named it after the officer to thank him for his service.

These spiders are about the size of your face. Their leg span is about 8 inches. They are related to the Goliath bird-eaters, a species of tarantula native to South America.

This new species is very colorful, very fast, and very venomous. They are an arboreal spider which means they live in trees. They prefer old established trees.

Because so many trees are being cut down to make room for humans some of the spiders have moved into buildings as well. Some of these spiders were found living in the old doctors' quarters of a hospital.

The most interesting news from this arachnid survey is that there may be more news to come. The head of the survey says that more new tarantulas may be announced in the near future.