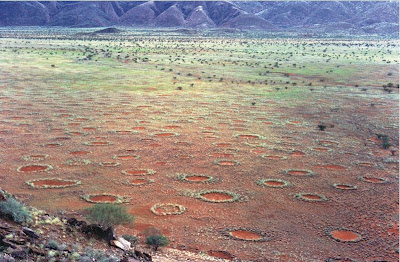 In western Africa it is not unusual to see little circles of bare patches of soil in the landscape. Many of the locals think they are the remains of a night of hearty partying left by fairies.

Everybody knows that fairies like to form a circle to dance the night away. When morning comes the fairies go back to their underground hideaways and wait for the next chance to come out to party.

There are a lot of folks who say there is no such thing as fairies. They spend a lot of time trying to prove that the circles have a natural cause.

It has been said that they are the product of toxins from poisonous plants. Or maybe it is a way for the vegetation in the area to organize itself like found in vegetation patterns in other parts of the world. Could they be caused by ant colonies breeding plant eating ants?

One ecologist identified the various insects living in or near the fairy circles. The heaviest population seemed to be an African termite. As a matter of fact the termites were also found to frequently burrow beneath the circles.

The idea is that termites feed on the roots of grass seedlings. Then rain water collects beneath the surface. The water gives the moisture for plants to grow around the edge of the circle.

Termites and other insects eat the plants.Other animals eat the insects. It keeps the cycle of life alive and well in the desert.

Other researchers don't necessarily agree. Just because the termites are there doesn't mean that they are the cause. Maybe they are just taking advantage of a good thing.

Some say that termites are actually rare at the fairy circles. One has even hinted that the studies might have been "helped" along by outside forces.

So what do you think? Fairies? Termites? Something else? I kind of like the idea of fairies, myself.
Nature News Bits